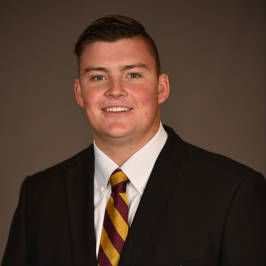 UVA head coach Bronco Mendenhall announced today (May 17) that former Arizona State offensive lineman Jack Powers (Salinas, Calif.) has transferred to Virginia for his final two years of eligibility. Powers, who will play defensive end at Virginia, has signed his financial aid paperwork and will enroll at UVA this summer as a graduate student.

Powers was not part of the Arizona State football team in 2015, but remained enrolled at the university. In 2014 Powers played in every game, primarily on special teams for the Sun Devils as ASU went 10-3 and won the Sun Bowl over Duke, 36-31. Powers redshirted the 2013 season at Arizona State.

Powers is a 2013 graduate of Palma High School where he was a third-team Cal-Hi Sports All-State honoree as a senior at defensive end. Scout.com listed him as the No. 61 offensive tackle prospect in the nation. Scout.com also regarded Powers as the No. 10 rated defensive end in the West region prior to the 2012 high school season.

Virginia, with a healthy Reece Beekman, is an order of magnitude better on offense

Virginia, with a healthy Reece Beekman, is an order of magnitude better on offense

The white shoe law firm Quinn Emanuel will conduct the external review of the events surrounding the Nov. 13 mass shooting at the University of Virginia that killed three football student-athletes and left two others wounded.

A Timberville man is dead after his 2018 Ford Mustang attempted to pass slower-moving traffic on Interstate 81 by using the right shoulder and rear-ending a tractor trailer.