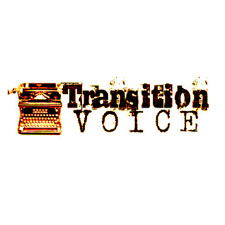 Transition Voice launched today as the first magazine devoted to the subject of oil and fossil fuel depletion and what it means to the economy.

The online publication will run news, analysis, and features to help families, communities, business leaders, and government officials better understand the challenge of finding affordable energy and the need for our whole society to start moving towards an economy beyond fossil fuels.

“Peak oil is so important that everybody needs to be talking about it. Whether you’re a Buddhist baker in Berkeley or a suburban soccer mom in Sarasota, we hope that Transition Voice will help you understand why energy matters more than almost anything else in the news today,” said Erik Curren, the publisher of Transition Voice.

Curren, who lives in Staunton, is a 20-year veteran of communications and advocacy on energy and environmental issues. Curren launched Transition Voice with his wife, Lindsay Curren, who serves as the magazine’s editor. She first became interested in energy during six years as online discussion moderator at washingtonpost.com covering business, politics, and world news.

Published monthly, the magazine is a project of Transition Staunton Augusta and can be found at http://transitionvoice.com.

“What we can predict is that the availability of fossil fuel is going to be diminishing; that it’s going to get more expensive to recover,” said President Barack Obama in June. And in April, the US Joint Forces Command put out a report saying that “by 2012, surplus oil production capacity could entirely disappear, and as early as 2015, the shortfall in output could reach nearly 10 million barrels per day.”

Every part of the world economy uses oil or other fossil fuels, from growing and shipping food; to making, moving, using and recycling cars and computers; to heating and cooling homes and offices. That’s why any big disruption in energy supply or increase in energy cost could raise prices for consumer products, bankrupt businesses, and destroy jobs badly enough to cause a global depression, civil unrest, and resource wars.

“Sure, peak oil is scary. But it won’t help to get overwhelmed by it. Instead, we should learn the facts, have a good laugh at just how big it all is, and then get to work. There’s a big upside to world that peak oil will bring – stronger communities, tastier food, better quality stuff, and healthier living. And if we do it right, graduating from the Oil Age will help us all live with more freedom,” said publisher Erik Curren.

While there are already several websites with information and discussion about peak oil, Transition Voice will be the first to offer a magazine format online intended to be accessible to a broad audience ranging from experts to people completely new to the issue of peak oil.

The launch issue of Transition Voice features interviews with the late Matt Simmons, oil-industry investment banker, as well as Rob Hopkins, the founder of the Transition movement. Dr. James Hansen, one of the world’s leading climatologists, agreed to let the magazine reprint the speech he gave at the Appalachia Rising rally in Washington, DC in September. The issue also offers pieces from more than a dozen contributors across the United States and beyond, with articles on the rise of Permaculture, how to talk about global climate disruption and the psychology of peak oil, and other features including book reviews, recipes, and an interactive reader poll.