If Jay Huff keeps playing D like this, watch out 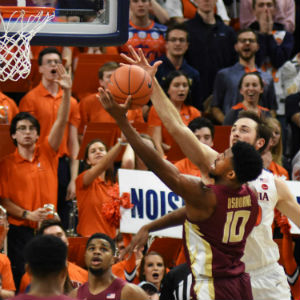 I had Jay Huff getting maybe 15 minutes Wednesday night against Clemson’s four-guard lineup.

Because really, that four-guard lineup that Brad Brownell uses is a five-guard lineup. Junior Aamir Simms is 6’8” at the five, but he has guard skills.

Just seeing Huff’s name in the starting lineup caught me by surprise. And then seeing him checking Simms from the outset: shocker.

The fact that he got 36 minutes – that Tony Bennett felt comfortable leaving him out there for 36 minutes – is huge for this team beyond just this one result.

“You think coming into a game that maybe when they switch onto him or when he gets dragged on a screen, then you can take advantage,” Brownell said after the game, detailing what would have been the wise strategy.

Seriously, you could almost feel Brownell’s eyes lighting up when he saw Huff match up defensively with Simms on the Tigers’ first possession.

And then: he was a stopper.

Simms ended up with 16 points on 6-of-16 shooting, but the bulk of the damage was done with Clemson in catch-up mode.

Simms had five points on 2-of-8 shooting in the first half, and then, with the game in the balance in the final three minutes, he went silent, not getting a shot off in the last 3:07.

Huff did the bulk of the heavy lifting on Simms, Clemson’s leading scorer (13.4 ppg).

“He bothered us on numerous occasions where we got the ball into a good position, and we didn’t come away with the points,” Brownell said. “The hard thing is then that puts pressure on you when you do get an open shot, you feel like you need to make it. You don’t get as many as you do against other teams, so that builds into why their defense is so good.”

Jay Huff getting praise for why the Virginia defense is so good.

This is the guy whose liabilities on the defensive end have been what has been keeping him from being able to display his many gifts on the offensive end.

You don’t get minutes from Bennett if you can’t play D, as we know.

Which, again, is why Wednesday could be huge for Huff, and for Virginia.

Huff, after the game, credited assistant coach Jason Williford for getting him ready.

Specifically, it was Williford “motivating me with a swift kick in the butt if I was going to jump today on shot fakes. That’s more or less what he was threatening,” Huff said.

“I told him I wasn’t going to jump, so I guess I can tell him I didn’t, which is fun,” Huff said. “I definitely feel like I’ve gotten more comfortable, but a guy like Aamir, that’s hard, because he separates a lot, so it’s really hard to get out there. He’s a very good player, so it’s sometimes hard to judge it, and sometimes we got it wrong, but I think for the most part we got it right.”