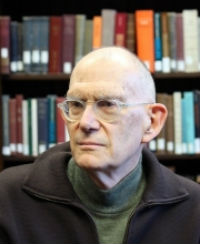 T.M. Scanlon, Alford Professor of Natural Religion, Moral Philosophy, and Civil Polity, Emeritus, at Harvard University is the third speaker in the 2017-18 Equality and Difference series, sponsored by the Roger Mudd Center for Ethics at Washington and Lee University. His talk is Oct. 26 at 5 p.m. in Stackhouse Theater.

Scanlon will speak on “Further Reflections on Tolerance (and Some Implications for Immigration).” The lecture is free and open to the public.

“T. M. Scanlon is one of the most influential moral philosophers in the world today,” said Angie Smith, Mudd Center director. “He is a leading defender of the moral theory known as contractualism, and he will look at some of the implications of this moral requirement for recent debates surrounding immigration.”

Scanlon’s work focuses on many topics including issues of freedom of speech, equality, human rights and moral responsibility. His dissertation and early papers were in mathematical logic, where his main concern was in proof theory. However, he soon found a calling in ethics and political philosophy, where he developed an influential version of contractualism.

“His talk in our series will focus on the nature and value of tolerance in a liberal pluralistic society,” said Smith. “Since tolerance requires us to treat all those with whom we share a society as having an equal entitlement to participate in the processes through which our society evolves and develops, it has dangers and risks for all of us.”

Professor Scanlon has received numerous awards and honors for his work, including fellowships from the National Endowment for the Humanities and the Guggenheim Foundation, as well as a MacArthur Foundation Genius Grant in 1993.

The author of several books, Scanlon’s newest publications include “Being Realistic About Reasons” (Oxford, 2014), and “Why Does Inequality Matter?” forthcoming in 2018.

The Mudd Center was established in 2010 through a gift to the university from award-winning journalist Roger Mudd, a 1950 graduate of W&L. When he made his gift, Mudd said that “given the state of ethics in our current culture, this seems a fitting time to endow a center for the study of ethics, and my university is the fitting home.”

For full details on this series, visit: https://www.wlu.edu/mudd-center.