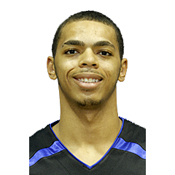 Eastern Mennonite University senior Todd Phillips (Waynesboro, Va./Waynesboro) can already note his playing career as being a part of the most successful stretch in EMU basketball history. Now he continues to add individual honors that make him one of the most decorated players in Eastern Mennonite history, as he was recently named All-American by two organizations.

Phillips, the 2011 ODAC Player of the Year, was tabbed All-America Third Team by the National Association of Basketball Coaches (NABC). D3hoops.com named him All-America Honorable Mention. The wing was also named All-America by D3hoops.com after his junior season.

The multifaceted Phillips was second in the Old Dominion Athletic Conference in scoring this season and top four in four other categories. He finished with averages of 18.2 points and 5.7 rebounds per game, as he increased his scoring average for the third straight time. He picked 2.2 steals per game and finished with the most steals in EMU history at 188.

Phillips was second in the ODAC this season with 121 made free throws, third with 157 field goals and 56 steals, and fourth with 82 assists.

The Runnin Royals lost to eventual champion Randolph-Macon in the ODAC Tournament semifinals and finished the 2010-11 season with a record of 22-5.