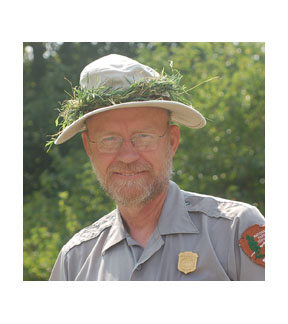 Eastern Mennonite Seminary student James Åkerson found the two weeks he spent this summer helping with clean up from the oil spill in the Gulf of Mexico a “natural extension” of his Christian faith.

Åkerson, who is about half way through his program of study at EMS, is a forest ecologist and program director for the National Park Service. Normally he works in insect and disease control and invasive plant management. When he heard about the oil spill and follow-up efforts, he made sure that his disaster response form was up to date. He was asked to leave immediately for Pensacola Beach, Fla.

“I saw my work with beach clean-up as an extension of creation care,” said Åkerson. “It was good for me to be there, because I saw first-hand the impact of my oil use.”

“One thing I learned is that it is my use of oil and demand for plastic that caused this disaster,” he continued. “The best thing for us to do to prevent this kind of thing from happening again is to reduce our own use of oil.”

Åkerson often finds intersection with his work in the Parks Service and his seminary studies. He is a part of the Creation Care group at Harrisonburg Mennonite Church where he attends and recently completed an internship.

“Creation care is something that should never be divorced from faith,” said Åkerson. “It has been our job to care for the earth since creation. Even before the fall described in Genesis, we were called to be stewards of the earth.”

“There is a big difference in treating creation like it is ours and remembering that we are just caring for it for someone else,” Åkerson stated. “I think it’s a wrong sentiment to say that because you own something it is yours. Really, you’re just taking care of it for now.”

Åkerson’s primary duty while on the beach clean-up crew was to make sure that local wildlife was not endangered. In Pensacola, this meant making sure that the birds that nest in the dunes and the sea turtles that lay eggs on the shore weren’t disturbed during the clean-up efforts.

“I had day shift for three days, and I’ve never been so glad to have night shift in my life,” said Åkerson.

“For the clean-up workers the heat and humidity, combined with the clean-up suits they were required to wear meant that we could only work 20-30 minutes out every hour or we would suffer from heat exhaustion,” he said. “I didn’t have to wear the protective clothing but was plenty hot in my long pants and shirts.”

Åkerson is taking several seminary classes each year so he can work them around his job with the parks service.

“Each class I’ve taken is a great tool,” said Åkerson. “I have found joy in my seminary studies, and I enjoy the ministry opportunities I have at Harrisonburg Mennonite and in the local community.

“I have felt a call to ministry since childhood,” he continued. “I have held a long litany of church positions, including teaching, leading Bible study and book keeping. My internship at Harrisonburg Mennonite confirmed that I was on the right road.”

Eastern Mennonite Seminary offers two- and three-year degrees and one-year certificate programs. For more information, contact the office of seminary admissions at 540.432.4257 or by e-mail at semadmiss@emu.edu.