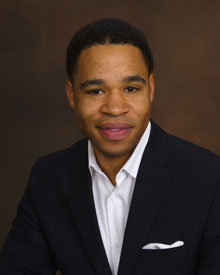 David Evans will nurture and push students as they wade into the increasingly diverse religious contexts of the world. The newest member of the Eastern Mennonite Seminary faculty in Harrisonburg, Evans has been named assistant professor of history, mission, intercultural and interfaith studies.

Evans brings expertise in cultural analysis and interfaith and intercultural mission from a historical perspective. He earned his doctoral degree from Drew University in the history of U.S. religion. His studies provided the context for his dissertation titled, “A Methodist Melting Pot: Religion, Race and Nation in America 1909-16.”

“I am interested in the history of Christian missions because it is often a site for religious, racial, gendered, national and cultural conflict,” said Evans.

“EMS’ core value of peacebuilding provides a context for faculty to prepare future leaders in transformational ministry,” continued Evans. “Verbal and physical violence are becoming hallmarks of life in the 21st century.

“Future Christian leaders will need to have more than the ability to preach and organize local churches, they will need peacemaking skills that will draw people into authentic relationships that respect and embrace difference.”

As a United Methodist with ties to the Mennonite church, Evans is uniquely suited for the EMS community, which includes dozens of United Methodist students. As he contributes to a newly formed partnership with Wesley Theological Seminary, in Washington, D.C., Evans will also help EMS fulfill the training requirements of the United Methodist church.

Evans was a member of Washington Community Fellowship, a Mennonite Church USA congregation, after graduating from Spring Arbor (Mich.) College in 2000. From 2002 to 2005, Evans worked for Mennonite Central Committee East Coast, conducting a process review and serving as peace and justice advocate. He received his master’s degree in the history of Christianity from Wesley Theological Seminary. Currently, he and his wife Faith co-pastor Boonton (N.J.) United Methodist Church. He is also a lecturer at Drew University in Madison, N.J.

Evans said, “I teach and write from the perspective of a black male United Methodist in order to provoke and confront the assumptions that constitute the concept of normal personhood. By doing so, I hope students will be able to embrace their unique and diverse selves and encourage others to do the same at EMS and in their ministry contexts.”

Michael King, vice president and seminary dean, said upon Evans’ hiring, “We see rich potential for our community in adding David’s experience and exposure to both  Mennonite and Methodist theology. In addition, we look  forward to learning from the African-American perspectives David will intentionally draw on as he helps us reflect on mission, intercultural and interfaith matters.”

Evans, who begins his role August 15, 2012, added, “I describe my vocation as pastoral-scholarship. God has called me to a life in the academy, not simply to produce scholarship and instruct students, but also to mentor and guide students in their own vocation.”