Seminary grad to be priest-in-charge at Emmanuel Episcopal 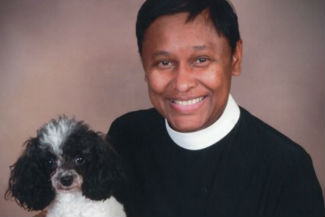 The Reverend Barbara Harrison Seward MDiv ’11 will be priest-in-charge at Emmanuel Episcopal Church in Harrisonburg, Va. Her canine companion is Gigi, named after starring character played by Leslie Caron in the 1958 comedy-romance “Gigi.” (Courtesy photo)

The Reverend Barbara Harrison Seward has accepted a call to become priest-in-charge at Emmanuel Episcopal Church in Harrisonburg. She is a 2011 graduate of Eastern Mennonite Seminary.

“From the days of old, I strongly believe that God planted the story of me within the soil of Harrisonburg,” Seward said. “Therefore, I’m coming home to the place where I encountered the living God. This community, including Eastern Mennonite Seminary has given me so much, and I hope to correspond in kind. My greatest hope for myself and for Emmanuel is that we will actively plant, as well as actively water the seeds of hope, justice, transformation and restoration.”

Seward returns to Harrisonburg and Emmanuel Episcopal Church, both places with which she has long connection.

Seward was selected during a nine-month process by a committee of seven lay parish members.

“Committee members were impressed not only with Mother Seward’s theological seriousness and spiritual depth, but also her concern for, and commitment to, pastoral care of her flock, and to promoting community outreach and social justice,” said Dee Childs, the church’s senior warden. “We believe Mother Seward has the spiritual gifts needed to serve as an effective priest-in-charge—helping our parishioners discern the ministries to which they themselves are called, and facilitating their growth in these ministries.”

Seward will preach and celebrate Holy Communion for the first time at Emmanuel on Aug. 11. A formal installation is tentatively planned for September.

She succeeds The Reverend Daniel D. Robayo Hidalgo, who was appointed last year as missioner for Latino and Hispanic ministries in the Episcopal Diocese of North Carolina. He had served at Emmanuel since 2009.

Seward first connected with Emmanuel Episcopal Church while a student at Eastern Mennonite Seminary from 2007 to 2011. She led and coordinated a speaker series on the topic of poverty for one of the church’s adult-education offerings. During this same period, she was also involved in ministries at Harrisonburg Baptist Church and Waynesboro United Methodist Church.

In 2012, Robayo and the church sponsored her when she enrolled at Virginia Theological Seminary in Alexandria to complete her formation as an Episcopal priest.

Earlier this summer, Seward completed a two-year term as rector of the Episcopal Church of Saint Benedict in Bolingbrook, Illinois. Previously she served for two years as priest-in-charge of Saint Bride’s Episcopal Church in Oregon, Ilinois.

Seward’s initial curacy following her ordination to the priesthood in 2013 was as a parochial assistant at Trinity Episcopal Church in Excelsior, Minnesota, near Minneapolis-Saint Paul.

Her journey to the priesthood began in Harrisonburg more than 12 years ago, when she was still employed teaching marketing and business courses in the city’s public schools. She received post-secondary education in marketing and communications at Fayetteville State University (North Carolina) and at Johns Hopkins University.

Emannuel Episcopal Church, located at 660 S. Main St., is a parish that traces its foundation to the mid-1700s.