An invader destroying maize in Africa is hitting countries where drought and political instability have already caused hunger. Virginia Tech’s Feed the Future Innovation Lab for Integrated Pest Management has mobilized to coordinate an attack on the fall armyworm. 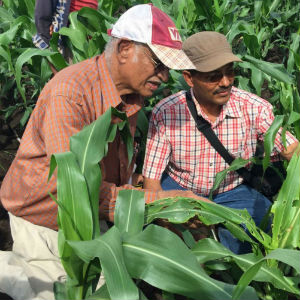 Muni Muniappan, of the Feed the Future Innovation Lab for Integrated Pest Management, left, and Tadele Tefera, of the International Centre of Insect Physiology and Ecology, inspect corn plants damaged by the fall armyworm pest in Ethiopia. The moth is causing major problems in countries already dealing with food insecurity.

The armyworm marches through cornfields like a regiment, with mounting casualties in Ethiopia, Kenya, and Tanzania. Now, the USAID-funded Innovation Lab is looking for ways to halt the pest in both its larval and winged forms.

“It is spreading like wildfire,” said Tadele Tefera, an entomologist at the International Centre of Insect Physiology and Ecology in Nairobi, Kenya, and the principal investigator on the Innovation Lab’s Rice, Maize, and Chickpea Integrated Pest Management for East Africa project. “The pest is new, and no one understands how to manage it.”

Virginia Tech entomologist and Innovation Lab Director Muni Muniappan traveled with Tefera to Ethiopia in April, where they witnessed the damage and met with struggling farmers.

Muniappan seeks a biological agent – a natural enemy, such as a wasp – to control the fall armyworm. He is working with researchers at the International Centre of Insect Physiology and Ecology to conduct a parasite assessment for the region.

“Right now there are two wasps that we know of with the potential to manage the pest at the egg stage,” Muniappan says. “However, hairs on the egg masses can act as a barrier, hindering the control agents from reaching the pests. So we need to find out which species are the most aggressive.”

Ethiopia, Kenya, and Tanzania are countries where the Innovation Lab runs a project on managing pests that devastate rice, chickpeas, and maize. At a meeting in Kenya last month, cohosted by the International Maize and Wheat Improvement Centre, the Food and Agriculture Organization, and Alliance for Green Revolution in Africa, scientists conferred with representatives from USAID, the World Bank, and international agricultural research centers to plan a strategy against the fall armyworm.

Currently, more than 300 million Africans depend on maize as their main food source, and 46 of 53 countries in sub-Saharan Africa cultivate the crop.

The fall armyworm is native to the Americas and only recently showed up in Africa. It usually feeds on leaves but during heavy infestations will also eat other parts of the plant including kernels. Full-grown worms cause defoliation, often leaving behind only stalks.

“I have been cultivating maize for more than two decades, but I’ve never seen such a catastrophic situation,” said Ethiopian farmer Kebede Woldermariam. “Maize is everything for us. I don’t know what will be our fate for the coming months.”

The fall armyworm’s quick spread and heavy destruction make it difficult to control, and intensive use of chemical pesticides has yielded little result, leaving farmers few options but to handpick caterpillars off their plants. The moth prefers corn, but will feed on over 80 different plant species.

Next steps include a management-and-awareness meeting in Ethiopia in July, which Muniappan is organizing through the Integrated Pest Management Innovation Lab. The meeting will raise awareness and share nonchemical techniques that farmers can deploy against the pests, such as plowing, setting pheromone and light traps, and growing other crops that could ‘trap’ the fall armyworm among the rows of corn.

The Integrated Pest Management Innovation Lab is a project of the Office of International Research, Education, and Development, part of Outreach and International Affairs.