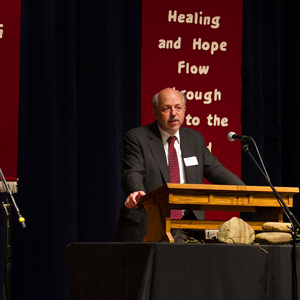 We tend to see mental illness as something that happens out there, to stigmatized strangers on the fringe of our churches, when in fact mental health issues affect our families, friends, loved ones, congregants, and many of us personally. In short, mental illness is experienced by everyone in church communities – by “us” and our loved ones, not just by “them.”

This was the recurrent theme of the 2013 School for Leadership Training (SLT) at Eastern Mennonite Seminary (EMS), Jan. 21-23, which was titled “Imagine Church as Healing Space.” The event attracted over 270 participants and resource persons who sought to “hear, hold, and hope” amid mental health challenges. Photos of the event are online.

Hosted and planned by EMS, the event felt historic: multiple participants said this was the first time in a public church context they had felt part of the group, not in spite of but because of their depression, anxiety, bipolar diagnosis, schizophrenia, and more. This was the first time they had felt normalized, not stigmatized, with their journey held in love, not primarily met with silence or marginalization. We see that experience, so easy to report but so rarely experienced, as a key gift the 2013 SLT offered.

A second gift was space to tell and hear the pain mental illness causes both its sufferers and those who love them. Earl and Pat Martin offered searingly moving glimpses of their journey through their son Hans Martin’s development of symptoms of schizo-affective disorder.

Earl shared journal entries he had written during the sleepless nights after Hans was first hospitalized. In these contemporary psalms of lament, Earl raged at a pitiless God who treats his creatures like vermin, snapping off their limbs, leaving them soaked in their own blood. Earl railed at this God as the sick one who should get treatment for insanity. He reported that after he stopped writing of his own volition, spent, his pen kept going and offered words from God, who said that God’s own son was in fact in treatment and was the roommate in a neighboring bed whom Earl had feared would hurt Hans.

A third gift was hope. This was not a cheap hope. Many at SLT, from participants through resource persons, told of confronting the anguish caused by suicide. To name just one example, in a laughter-yet-tear-stirring blending of drama and storytelling, Ted Swartz told of his journey through his comedy partner Lee Eshleman’s battle with depression and of how the suicide to which it drove Lee so shattered Ted’s own life and career that years have gone into rebuilding. Yet precisely in this heartrendingly open naming of the torment, Ted offered hope—hope for himself and hope for those still grieving the loss of their own loved ones.

Hope was also movingly offered through stories of persons seeking to live recovery-focused lives even amid the diagnosed illnesses once thought to be themselves virtual death or at least imprisonment-in-miserable-conditions sentences. John Otenasek, himself a “consumer,” as he put it, in recovery, led a panel of men (including Hans Martin) and women who told of enduring addictions, joblessness, homelessness, and more. Yet they also spoke of finding hope—often from peers confronting their own illnesses—enabling them to live meaningful and even joy-tinged lives while navigating ongoing bi-polar episodes or hearing voices.

And hope was offered when Tilda Norberg modeled what can happen when we attend to the “God icons” in our lives and dreams. She risked a live Gestalt pastoral counseling session with a courageous Sherill Hostetter. Drawing on insights from one of Sherill’s recent dreams, Norberg led Sherill in working through how her mother’s undiagnosed and untreated mental illness had affected her as a child and even now as a leader.  She more fully claimed her own empowered voice as a recently ordained minister and congregational consultant.

Fittingly enough, just days after the 2013 SLT concluded, the New York Times published a hope-filled article on Jan. 27, 2013 by Elyn R. Saks, diagnosed with schizophrenia yet a successful law professor at the University of Southern California. As did many at SLT influenced by the recovery movement in mental health, Saks stressed, “An approach that looks for individual strengths, in addition to considering symptoms, could help dispel the pessimism surrounding mental illness. Finding ‘the wellness within the illness,’ as one person with schizophrenia said, should be a therapeutic goal.”

In a conclusion that movingly echoes the convictions SLT participants took with them, Saks reported: “’Every person has a unique gift or unique self to bring to the world,’ said one of our study’s participants. She expressed the reality that those of us who have schizophrenia and other mental illnesses want what everyone wants: in the words of Sigmund Freud, to work and to love.”

When we checked with the Martins to make sure our references to their stories were acceptable, Pat said, “One of the SLT statements that stuck with me, spoken by either Joan or Ijeoma Achara that first night, pulled us all into the common task of being human: ‘Recovery is about claiming one’s story. The tools are the same for all of us whether struggling with mental illness or an overwhelming job.’” At EMS we’ll continue to ponder how, whatever the details of our stories may be, we help each other claim them.