Busy 2010 at the Wildlife Center 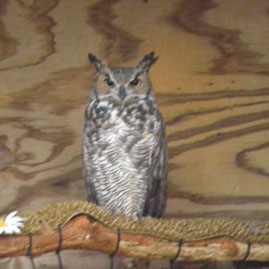 The Wildlife Center of Virginia, an internationally acclaimed teaching and research hospital for wildlife and conservation medicine located in Waynesboro, admitted a total of 2,303 animals for treatment during 2010 – injured, ailing, and orphaned wildlife from all across Virginia.

Most animals are brought to the Center by concerned citizens; others are brought in by animal control officers, other federal, state, and local officials, from humane societies, etc.

During 2010, a total of 242 animals – or one in 10 cases – were brought to the Center after they were attacked by free-roaming cats. Birds and other animals that survive an initial cat attack are still in danger; unless treated, infections from the toxic bacteria found in a cat’s mouth kill a significant number of animals.

During 2010, another 215 patients were classified as “kidnap” victims – a young animal brought to the Center that, in fact, needed no help from humans. These are animals still receiving care from their parents, or young animals ready to live on their own. “Despite our natural inclinations, the BEST chance of survival for a young uninjured animal is often to leave it in its parents’ care,” said Ed Clark, President and Co-founder of the Wildlife Center of Virginia.

Center staff work with citizens who find young animals to assess whether these animals really do need human intervention. [The Center’s website – www.wildlifecenter.org – includes a special “I Need Rescue Advice” section to help citizens assess the health-care needs of animals.] “The Center encourages those who care about wildlife to ask questions FIRST about the most appropriate course of action,” Clark added. The Center’s front desk is staffed seven days a week from 9 a.m. to 5 p.m.; one of the Center’s veterinarians is on call 24 hours a day.

Since its founding in 1982, the nonprofit Wildlife Center has cared for more than 56,000 wild animals, representing 200 species of birds, mammals, reptiles, and amphibians.

The goal of the Center is to “treat to release” – to restore patients to health and return as many as possible to the wild. The Center provides state-of-the-art medical care for the sick and injured, and sustained, quality foster care so that animals may be returned to the wild with the ability to survive, and thrive, in their native habitats.

The Center trains veterinary and conservation professionals from all over the world, and wildlife rehabilitators across Virginia, and is actively involved in comprehensive wildlife health studies and the surveillance of emerging diseases.