Where can you find the best expert tennis picks for the latest big tournaments and Grand Slams? At Augusta Free Press, our experienced insiders offer their data-supported tennis predictions and top tennis picks.

Bookmark this page for future reference and read on for the best tennis picks for today. Our experts provide inside tips and teach you how to make your very own tennis betting predictions.

There are four Grand Slams – such as the US Open and Wimbledon – and dozens of tournaments on the ATP and WTA tours each year. There will also be occasional special events such as the Olympic Games. To quickly check our latest tennis picks for today, be sure to bookmark this page.

You’re probably wondering – What tournaments do we offer our expert tennis betting picks on? So you have an idea of what to expect when you come to Augusta Free Press for your latest tennis predictions, we’ve identified some of the tournaments we’ll likely cover.

Tennis Picks for the Australian Open

Despite being a hard court, the unique Plexicushion surface is slower, lower, and has less spin than other hard courts like the US Open. As the first tournament of the year, it can be difficult to consider form but historical performance can often be a good indicator of a strong performance in this tournament.

Tennis Picks for the French Open

Commonly referred to as Roland Garros, the French Open is the only Grand Slam to be held on clay courts. This makes the French Open one of the hardest tournaments of the year because the surface is tough on the body and produces far more bounce than hard or grass courts.

So grueling is the French Open that many multi-Grand Slam winners have never won at Roland Garros. When we make tennis picks for the French Open, we consider the player’s experience on clay courts – for example, Rafael Nadal has an uncanny ability to dominate on the surface and has 14 French Open titles.

Wimbledon is arguably the most famous tennis tournament in the world and it happens to be the oldest Grand Slam. This prestigious event is the last remaining major to be played on grass courts.

Tennis Picks for the US Open

The US Open is the final Grand Slam of the year and is boasts the highest prize pool of any tennis tournament, currently standing at over $50 million. With a hard court, it really is anyone’s ball game and low-seed players have produced major upsets – like Emma Raducanu who was ranked 150th in the world before her US Open win in 2021.

Making tennis picks for the US Open is just about knowing the recent form of all the players involved to try and spot a player of value who may be overpriced or determine which favorite will be too strong.

Tennis Picks for the Davis Cup

The Davis Cup is a slightly different event than the usual tennis tournaments you’ll typically bet on. Rather than playing as individuals – or doubles – this tournament sees players represent their countries in a round-robin event. Played between 18 different nations, this competition is more about the team effort rather than any one player.

The female version of this tournament is known as the Billie Jean King Cup. Trying to bet on a Futures market can require a great deal of research since you’ll need to consider how many players will perform when picking a winner. This will mean trying to find as much information as possible on less famous players too.

Besides the Grand Slams, there are also nine large tournaments known as Masters. These tournaments follow a similar format to each other and are played across Europe and North America. Matches are played on a mixture of hard and clay courts and the top eight players from the tour will compete in the ATP finals.

The female equivalent of the ATP Tour is the WTA Tour and it features eight WTA 1000 tournaments in which several of these are combined with the ATP masters tournaments. Futures betting on either the ATP or WTA tour can be a challenge since it’s difficult to know how many tournaments any one player will compete in.

For tennis picks for each tournament, we simply consider the latest news, the players’ form, and the conditions of that event.

What are Tennis Picks?

Tennis picks are just another name for tennis tips and predictions. They are selections or outcomes provided by anyone from your best friend, an online tennis expert, a professional sports bettor, or a former professional tennis player. Free tennis picks are always available online during major tournaments and grand slams.

Tennis picks could be as simple as Emma Raducanu winning the Canadian Open or as complex as handicapping an individual game between two breakout stars. Some tennis picks will try to predict certain markets like set betting. Quality tennis predictions will always be based on factors such as form, venue, and historical data.

Tennis Picks Against the Spread

Spread betting – or “betting against the spread” – refers to betting on sets in a tennis match. Also called Set Betting, this is where you wager on the game score during sets of a tennis match. You’ll likely see this market offered at +1.5 and -1.5 which is essentially wagering on the score after the next set – such as 2 – 1 or 1 – 2.

Some tennis betting sites offer set handicaps too. For example, betting on the favorite with a +1.5 handicap would mean that the player will only concede a single set during that game.

It is possible to put all those tennis picks into a single bet. It’s called a Parlay and this bet type is a combination of 2 or more single bets in a single wager. For example, you could place a wager on three different matches from the Canadian Open and receive multiplied odds.

Let’s see how tennis picks and parlays work with an example. In the image below, you can see that two single bets at $20 each on the Atlanta Open will result in $33.48 if they are both successful. But in the parlay with the bets multiplied together, you would receive a payout of $47.43 if the wager is successful – risking half the amount of the two single bets too. 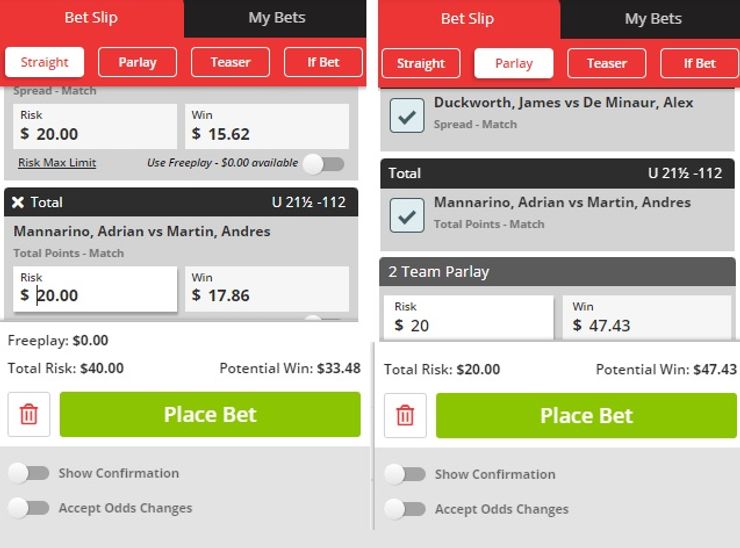 The trade-off with a wager like this is that the tennis picks need to be spot on. That’s because all selections within a parlay must be winners for the bet to be successful. If you have a 3 leg parlay and only pick 2 winners, you’ll lose the entire wager.

What are Tennis Computer Picks?

The majority of tennis picks online will be produced by individuals or groups who have conducted some level of research and analysis. Most have a seriously good knowledge of tennis too. However, some advanced sports tipping groups offer tennis predictions formed entirely based on mathematical and statistical models.

Computer simulations take statistical data and produce outcomes such as likely winners, number of sets, the total number of games, and more. Of course, these simulations cannot take non-statistical information such as injuries, player training, or weather conditions.

A retail sportsbook might not always be accessible to many tennis bettors and the act of having physically go to a sportsbook is rather inconvenient. This is why we have made sure to hand-select some of the very best tennis betting sites in the US. These offshore sportsbook sites offer loads of markets, fiercely competitive lines, and live betting.

Where to Find Tennis Expert Picks

Have a look online today for tennis picks and you’ll likely come across a couple of groups that offer simulation predictions. Mathematic models for simulation tennis predictions can be hit and miss if you don’t find a reliable platform, so be sure to put in the time and do some due diligence before backing their tennis picks.

You can also find professional and former-professional tennis players who will occasionally make tennis picks for major sponsors, sportsbooks, and tournament websites.

Online sportsbook BetUS has a unique platform called BetUS TV which includes tennis predictions, pre and post-match analysis, and outright tennis picks. Another way to pick up handy tennis picks is by surfing social media – platforms like Twitter and Facebook have plenty of groups and bettors offering their tennis picks.

How we Make Tennis Picks and Predictions

We use extensive research to make our leading tennis predictions. We think there are a few key considerations that can influence a successful tennis selection. So you know how we have come to produce our latest tennis picks, we explained our biggest two factors below.

There is no more telling piece of information than the latest form of a player. Even the best players in the world can have an off period. In some cases, the better player will be favorite but knowledge of their form would imply they could be defeated by a much lower seed player that is in form.

We consider the latest news for our tennis predictions too. The favorite who is in fine form may not be the stronger bet if it is now known they are carrying an injury. This is particularly useful when live betting and a player shows signs of pulling up lame.

There are three distinct types of tennis courts for both Masters and Major tournaments. They are grass, hard courts – which are synthetic – and clay courts. Different court surfaces can provide advantages or disadvantages for some players – consider that Rafael Nadal is the best performing clay court player in history.

Carefully consider how certain players perform on specific surfaces. New players may struggle at the Madrid Open if they’ve never played on clay courts before while experienced players like Novak Djokovic may thrive as they have years of experience on the surface.

Who is the Favorite?

Player rankings are very important. They provide a rough guide of who the favorites and underdogs are before sportsbooks ever release their odds. Knowing who the favorite and underdog are can help identify odds of value or a sure thing. For example, Rafael Nadal could face a 150th seed player in an opening round.

You can find value in miss-matched events too – especially when it comes to markets such as set betting or totals. It can sometimes be quite easy to make successful tennis picks for Totals bets when one is highly likely to dominate the match.

How often do tennis favorites win?

Smarkets combed through 4,838 Grand Slam match results. They determined that the pre-match favorite won the match 78.5% of the time.

Where can I bet using tennis picks today?

You might be able to head to a local sportsbook if your state has authorized retail sportsbooks. Alternatively, offshore betting sites like BetOnline can be accessed from the US. Always consider your local jurisdiction’s online gambling laws.

How do you predict tennis?

To produce successful tennis predictions, a sports bettor must consider numerous important factors including the form of the players involved, the type of surface being played on, and historical data.

The best platform to find expert-guided tennis picks and predictions is right here at Augusta Free Press. Alternatively, you can find a number of websites, publications, and organizations offering tennis picks.