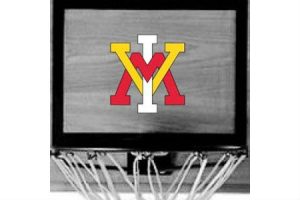 Seeking its first win of the season, the VMI basketball team nearly accomplished the task but fell by a 68-67 score in the final moments to Idaho as part of the Red Wolves Classic Friday afternoon at First National Bank Arena in Jonesboro, Arkansas.

VMI freshman guard Kamdyn Curfman scored a season-high 20 points to lead the Keydets in the loss.

The Keydets (0-5, 0-0) trailed by as many as 12 midway through the second half but continued to fight and pull themselves out of the hole. With 2:09 left in regulation, VMI senior center Tyler Creammer cut the Idaho lead to 66-64 with a layup but the Vandals’ BJ Simmons responded with his own basket moments later to put Idaho back up by four with 53 seconds to play.

On the other end, VMI quickly responded with a three-pointer by sophomore Jake Stephens to put the deficit at 68-67 with 43 seconds on the clock. Idaho then missed a three with 0:17 to play before Curfman grabbed the rebound and VMI called a timeout.

VMI junior Myles Lewis penetrated the paint following the timeout but his layup attempt was blocked by Vandal Trevon Allen and freshman Sean Conway’s rushed three in the final second was off target to allow Idaho to escape with the 68-67 final score.

Curfman scored 10 points in both the first and second halves to finish with a team-high 20 points while senior Garrett Gilkeson and Lewis both finished with nine points apiece.

Conway saw his first game action of the season and finished with four points on 2-4 shooting to go with two boards and one assist. Fellow freshman Travis Evee finished with seven points while Stephens and Creammer finished with five apiece.

Trevon Allend paced the Vandals with 16 points in the win while BJ Simmons ended the game with 11 points.

The Keydets resume the Red Wolves Classic on Sunday at noon with a matchup against UC Davis at First National Bank Arena in Jonesboro, Arkansas.