National top 10 recruit Andrew Brown had a forgettable, to say the least, freshman season in 2014, “limited,” he said, answering a reporter’s question on how he would sum up his first year in college football, by turf toe and shoulder injuries that had him playing catch up all fall.

The story at the end of the miserable 2013 UVa. football season was that it was a big recruiting haul in the Class of 2014 that was saving Mike London. 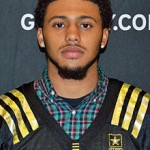 Chris Graham: Mike London stocks the cupboard for his successor

Apologists for embattled UVa. football coach Mike London begin their defense of the Cavs’ awful 2-10 2013 season by pointing out how young the team was this year – with just seven seniors seeing action. The notion advanced along with this defense is that London’s first three recruiting classes, all in or around the Rivals Top 25, will get better with age.

Andrew Brown Sr., the father of consensus national Top 10 football recruit Andrew Brown Jr., “wanted to ensure Mike London is gonna be there, because that could change the situation around,” Brown Sr. said in a recent interview with the Washington Post.

UVa. football coach Mike London talks with the media in advance of his team’s game at ACC Coastal Division rival Miami (7-3, 3-3 ACC) on Saturday. Virginia (2-8, 0-6 ACC) enters the game on a seven-game losing streak. The ‘Hoos lost their most recent game, on Nov. 9, 45-14 at North Carolina.