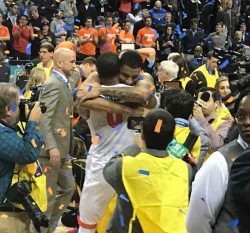 The 2021 ACC Tournament will be held at Capital One Arena in Washington, D.C., and the 2022 event will be played at Barclays Center in Brooklyn, New York, Commissioner John Swofford announced today.

With the announcement, the site of the ACC Tournament is set for the next four years. Spectrum Center in Charlotte, North Carolina, will serve as host for this season’s Tournament, followed by Greensboro Coliseum in Greensboro, North Carolina, in 2020. The sites are determined by a vote of the league’s 15-member institutions.

“The next four years of the ACC Tournament will be played in locations that are tremendously meaningful to the ACC, our players, coaches, alumni and fans,” said Swofford. “All four cities offer first class venues and hospitality for our league, and we appreciate the continued partnership with each of these outstanding communities.”

The ACC Tournament has been held in eight different cities and 12 venues since the inaugural event in March of 1954. Since 2000, the Tournament has been played throughout the ACC footprint including 11 times in the state of North Carolina (seven in Greensboro; four in Charlotte), three times in Atlanta, twice in Washington, D.C., twice in Brooklyn and once in Tampa.

Washington, D.C., has been the site of the ACC Tournament on two previous occasions in 2005 (MCI Center) and 2016 (Verizon Center). Duke claimed the title in 2005 with a 69-64 win over Georgia Tech in the championship game. In 2016, North Carolina won its 18th overall ACC title, defeating Virginia 61-57 in the finals.

Barclays Center recently completed a successful two-year run as the Tournament host site, setting attendance records in both 2017 and 2018. Last year, the ACC set a record for attendance at a college basketball event at Barclays Center with 18,157 fans at both the semifinals on Friday night and the championship game on Saturday evening. The ACC broke its own record set during the semifinals and finals of the 2017 tournament at the arena.

Charlotte has hosted the ACC Tournament on 12 prior occasions at three different arenas. The tournament was last played in the Queen City in 2008, when Time Warner Cable Arena, now Spectrum Center, served as the host venue for the first time.

The Greensboro Coliseum has hosted the ACC Tournament more than any other venue and will be hosting for the 27th time in 2020.