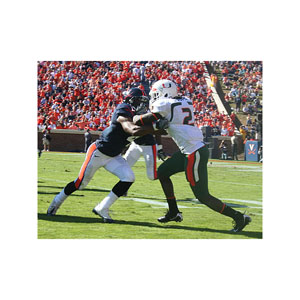 Depending on how you account for things, around half of the NFL uses a 3-4 defensive front – featuring three down linemen and four linebackers. The scheme is popular with pro coaches looking for ways to slow down West Coast offenses that rely on timing in the passing game and quick hitters on the ground. Teams employing the 3-4 need to have guys with size to play in the front seven, and especially on the line, where the three down linemen need to be able to take on blocks that free up linebackers and safeties to make plays behind them.

The problem with trying to use the 3-4 in college, as former Virginia coach Al Groh found out, comes in recruiting players to fit the scheme.

“I like the 3-4. I think it is a great defense, but it is a little harder to recruit to because of the size of the guys that you’ve got to get,” said Anthony Poindexter, a former All-America at safety and holdover from the Groh regime now on staff with new UVa. coach Mike London.

Poindexter played at Virginia when head coach George Welsh employed a 4-3, which emphasizes speed over size. Think Poindexter in his heyday, Chris Slade, a smallish defensive end in the early 1990s under Welsh who ended up playing linebacker in the NFL.

“The 4-3 gives you the flexibility to take one of those safeties, move them down to linebacker, or take one of those linebackers and move them down to defensive end. I think a lot of that has helped us in our recruiting efforts. Guys that we had to not recruit because of the way we were set up in the past years, now we can recruit them. It will add a little bit more versatility to our team,” Poindexter said.

Versatility may be the operative word for London, also a former Groh assistant, with the switch to the 4-3 this year. The current crop of Cavalier defensive players was recruited to play the 3-4.

“We’ve taken the approach of taking the big safeties and making the big safeties outside backers, taking the outside backers who were standup guys, example, Cam Johnson, who was 228, 232, when he played standup outside linebacker, now he’s like 260, 265, and how he has his hands down on the ground, take a guy like Matt Conrath, who lined up over the tackle, two-gapped the tackle, and move him inside as a tackle – the whole aspect of getting faster and getting more athletic guys on the field is the focus,” London said.

Which is to say, yes, the Cavs could be better on defense this year with the injection of some much-needed speed on that side of the ball. Depth could be an issue, aside from the obvious issue of guys knowing what to do out there.

“I made one small mistake. First meeting, I told them, Don’t worry about making mistakes, just go as fast as you can. So when we made mistakes, and we made a lot of them, it was, You said not to be afraid to make mistakes,” defensive coordinator Jim Reid said of the experience that was spring football.