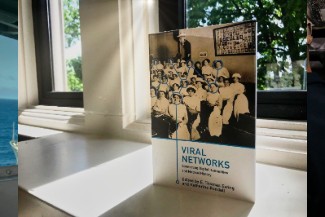 Edited by E. Thomas Ewing, a professor of history, and Katherine Randall, a doctoral candidate in rhetoric and writing, the book is the culmination of the 2018 Viral Networks workshop.

Virginia Tech Publishing and the University Libraries were partners from the beginning of this project, as they were part of the initial proposal to the National Endowment for the Humanities and the National Library of Medicine. Peter Potter, publishing director of the University Libraries, and Nathaniel Porter, a data scientist at the libraries, attended the workshop, and thus were part of the first round of reviews of papers that became the chapters.

Robert Browder, a digital publishing specialist, and colleagues in the University Libraries worked with the co-editors on the structure of the book, editing of chapters, data visualizations, cover design, and dissemination, which has ensured that each stage of this process has been an active collaboration between the University Libraries and the co-editors and chapter authors, explained Ewing.

Inspired by models of networked teaching methods, the Viral Networks workshop brought together scholars whose research focuses on medical history topics, from the Black Death in 14th-century Provence to psychiatric hospitals in 20th-century Alabama. During this workshop, these scholars discussed how they use networks as a tool for historical analysis. They also read, edited, and evaluated each other’s writings and chapter contributions to “Viral Networks.”

“This book represents a wonderful partnership supporting research and exciting new ways of exploring and writing the history of medicine in our digital age,” said Jeffrey S. Reznick, chief of the History of Medicine Division of the National Library of Medicine.

“Viral Networks” shows the critical role that networks have frequently played in human societies while simultaneously demonstrating the power of network analysis for analyzing them. Readers will learn how to identify an appropriate network to analyze, find the best way to apply network analysis, and choose the right tools for data visualization. The result is a fully networked project rather than just a collection of individual chapters.

“The book is not the typical collection of essays in which each chapter essentially summarizes an author’s research,” Potter said. “In ‘Viral Networks,’ the chapters are personal essays in which the authors describe their attempts to incorporate network thinking into their own research. This makes the book a great source of practical advice for other historians who may be contemplating using network thinking in their own research. There’s nothing else out there like it.”

This volume brings together many priorities in both the College of Liberal Arts and Human Sciences and Virginia Tech, such as supporting innovative research, transdisciplinary integration across disciplines, open-access publication, graduate student and faculty scholarship, and experiments with new forms of scholarly dissemination to broad audiences.

“It was rewarding to be involved in a process that connected so many priorities and created new opportunities for collaboration,” Ewing said.

“Viral Networks,” an open-access book published in multiple formats, can be downloaded for free on the Virginia Tech Publishing website and through the National Library of Medicine’s Digital Collections. Print editions can be purchased through online retailers, such as Amazon.