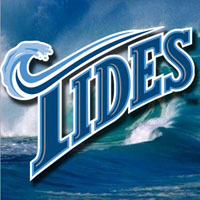 Tim Beckham delivered a go-ahead single in the 10th inning Sunday at Harbor Park, and the Norfolk Tides dropped the finale to the Durham Bulls 4-3 in front of 5,587 fans.

Sean Gleason (0-1, 3.00) took the loss after tossing 1.0 inning. He gave up a one-out single to Ray Olmedo. Olmedo moved to third base when Matt Angle’s diving attempt at J.J. Furmaniak’s sinking line drive came up empty. That set the stage for Beckham’s game winner.

The Tides staked starter Chris George to an early lead with two runs in the 1st inning. Brandon Snyder and Jake Fox delivered back-to-back RBI singles for the home team, but George couldn’t make the lead hold up.

George, who entered the game with a sparkling 2.87 ERA in his previous six appearances, never found his command during his 3.0 innings on the hill. Pitching with slick playing conditions as a steady rain fell onto the field, the former first round draft pick tied a season high with five walks and gave up three runs on five hits.

Daniel Mayora put the visitors on the board with a one-out single in the 2nd inning that scored Russ Canzler, who walked to leadoff the inning. Brendan Harris connected on his ninth home run of the season an inning later, a solo shot that briefly put the Tides ahead by two, but the Bulls tied the contest with a trio of extra base hits in the 3rd inning. Brandon Guyer led off the frame with a triple and scored on Matt Carson’s double to center field. One out later, Leslie Anderson came through with an RBI double that knotted the game at 3-3.

Dane De La Rosa (5-4, 3.43) took the win in relief of Matt Torra after tossing 2.0 shutout innings. He gave up two hits but struck out five batters.

Torra lasted 5.0 innings and gave up three runs on six hits. He struck out two and walked one.

The Tides will take Monday off before heading to Durham Tuesday for the start of a two-game series with the Bulls. RH Chris Tillman (3-4, 4.13) will take the ball for the Tides opposite LH Matt Moore (3-0, 1.04). The Tides will return to Harbor Park for the final homestand of 2011 on Monday, August 29 when they take on the Charlotte Knights.