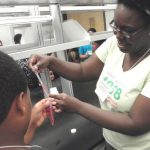 It should come as good news that students enrolling in university STEM programs across the country are increasingly diverse.

Students pursuing studies in STEM fields statewide will continue to have access to some of the best and brightest minds at NASA.

Registration is open and proposals are being accepted for Virginia Military Institute’s fifth STEM education conference.

Bring STEM to the Waynesboro YMCA

The Waynesboro YMCA launched a gofundme account to raise money to bring STEM (Science, Technology, Engineering, and Math) programming to Pre-K, After School and Summer programs.

The University of Virginia’s School of Engineering and Applied Science and Curry School of Education have joined forces to offer a five-year Bachelor of Science/Master of Teaching program, responding to a nationwide demand for teachers with rich backgrounds in the so-called STEM fields – science, technology, engineering and mathematics.

Battelle sees a direct corollary between early science education and workforce development in Charlottesville. That’s why its charitable giving spans from support for preschoolers to middle-schoolers and—through scholarships— to students on the cusp their of professional science careers.

Sally Ride Science announced on Wednesday the winners of a nationwide contest for K-12 educators in the U.S. to recognize innovations in instruction related to science, technology, engineering, and math (STEM) as well as STEM careers.

Washington Redskins coach Jay Gruden talks with reporters after the Redskins’ 44-17 season-ending loss to the Dallas Cowboys on Sunday.

When a university group from Iraq’s northern Kurdish region traveled to study at Virginia Tech this past summer, their home was at peace.