Lunch with the Generals 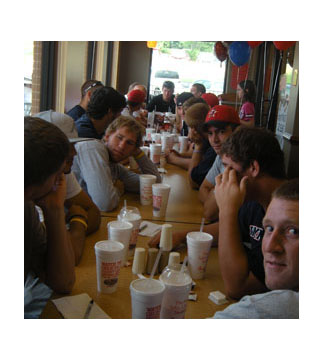 Wednesday was Lunch with the Generals Day at the newest, busiest restaurant in town, Chick-fil-A.

Fans showed up to get their baseballs signed and to take pictures with the Waynesboro Generals.

First-year player Jon Clinard of Austin Peay was among the Generals out for the event.

“This is our first time coming out to meet the fans,” said Clinard, an infielder who is hitting .240 with 17 RBI in 33 games. “Waynesboro is great, the community is very welcoming and supportive. They have treated us well.”

“I was planning to take the summer off, but then I got a call from the coach and decided to come on down and play,” said Summers, who is 1-1 with a 3.00 ERA in three appearances, including two starts, for Waynesboro this summer.

Summers was not the only new team member out at the Chick-fil-A today. Catcher Haskell Fink has been with the team for about three weeks now.

“I decided to come after I got the call because I knew it was a good league,” said Fink, another Austin Peay product who is hitting .250 in six games played this summer.

Bethany Shelton, head of PR at the local Chick-fil-A, was there to see how it all unfolded.

“We saw Harrisonburg Chick-fil-A do it with their team the Turks, and we saw how fun it was. The boys just really enjoyed it, and it brought a good crowd, so we thought we would do the same,” Shelton said.

Shelton would like to make the Lunch with the Generals Day into an annual event.

“It’s a good way to advertise for not only us, but them also. Like today they have a game, so meeting the fans this afternoon is a good way to let them know about the game this evening,” Shelton said.