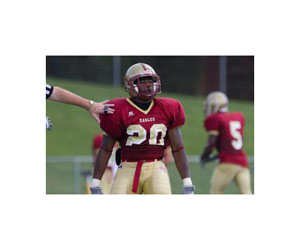 Former Bridgewater defensive back Chris Killian has signed a contract to play with the Western Michigan Thunderhawks of the Indoor Football League.

“I can’t say enough about the Bridgewater football staff and how they helped me get to this point in my career,” Killian said. “Jack Johnson, Peter Raeford and Stephon Healey all made me into a different player. Coach Clark is the guru behind it all though, he puts it all together and I’m thankful for what they’ve done for me.”

Link to the rest of the story on VaSportsOnline.com.