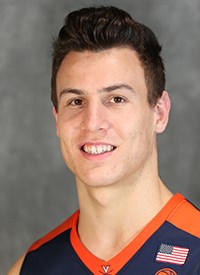 Francisco Caffaro redshirted this season for the Cavaliers, learning behind Salt, Diakite and Jay Huff, but could see significant action in the upcoming year.

Not much was known about Caffaro when he committed to the Cavaliers in May, 2018, but it didn’t take long for him to change that. The following month, at the FIBA U18 Americas tournament in Canada, Caffaro posted 16.7 points and 8.8 rebounds across six contests for his native Argentina. He was named to the all-tournament first team for his efforts.

Caffaro stands a rock-solid 7-feet and 233 pounds. His frame and physicality reminds some of Salt, but strength and conditioning coach Mike Curtis called Caffaro “a little bit more refined offensively at this point” when comparing both players’ redshirt seasons. For what it’s worth Caffaro, scored 22 points on 6-for-9 shooting from the field and 10-for-12 shooting from the charity stripe against a USA team loaded with top talent in the Americas tournament. He also added six boards and four assists. Those highlights can be found here.

Caffaro is extremely active inside on both ends of the floor, and he works hard to establish good position, whether he’s catching the ball on the block to attack offensively or preparing to get a rebound on the defensive end. He goes for the ball at its highest point and shows good instincts and strength on the boards.

Caffaro’s biggest strength at that tournament was, well, his strength. He could out-muscle opposing post players to get wherever he wanted. Strength doesn’t disappear at higher levels, but the advantage is minimized a bit. Caffaro likely won’t be able to bully his way through defenders like he did against high schoolers last summer. He’ll look to refine his game a bit, especially his face-up game.

Another issue, though not exactly related to his game, is his ability to stay healthy. Caffaro arrived at Virginia with a broken bone in his leg, and his rehabilitation meant a redshirt year was the only sensible option. He also dealt with back issues throughout the season, VirginiaSports’ Jeff White reported. Caffaro plays the game really hard, which is obviously a good thing, but injuries, especially recurring ones like back problems, can be tough to overcome. Staying healthy is key.

Time and time again, redshirt years have helped Virginia’s players. Fellow international big men Salt and Diakite both took one and blossomed into valuable contributors for Virginia. Caffaro can follow in that path given his size, strength and activity level. You don’t just luck into first-team honors at major international tournaments. Caffaro’s a legitimate player with promise.

There are certainly some areas to address, however. The first, undoubtedly, is Caffaro’s face-up game, one thing he focused on during his redshirt year, according to roommate Kody Stattmann. Caffaro should have a solid base as a midrange shooter given his abilities at the free-throw line. He shot 64.2 percent from there at the Americas tournament, a reasonable number for a still-developing big man. Caffaro has shown his ability on the block. If he can turn around and make a jumper out to 10 or 12 feet, that will help him immensely.

Defensively, adjusting to the pack line defense is and always will be a challenge for Virginia players early in their careers. Defensively, it appears Caffaro and Salt have some similarities, and Salt struggled with fouls as a redshirt freshman. Defending without fouling is an absolute must in Bennett’s system, and Caffaro must continue to develop in that area.

The physical tools are what make Caffaro an exciting addition to this year’s active roster. He’s big, strong and hard-working. He doesn’t take plays off, and he can score effectively when he gets good position low on the block. He sprinkled in some impressive passing at the Americas tournament, and Curtis’s assessment of him as a more offensively refined Jack Salt is a pretty good start. There are minutes to be had behind Diakite (if he returns) and Huff in the frontcourt, even when the Cavaliers use a four-guard lineup. Expect Caffaro to make a strong run to earn those minutes.