How Virginia basketball figures to move on from 2019 departures 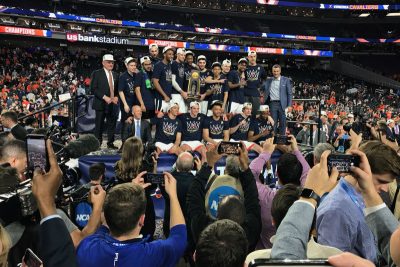 Monday marked two weeks since Virginia won the national championship, and while the celebration is still fresh in the minds and hearts of the Cavaliers and their fans, the day also held some significant developments for next year’s team.

Star shooting guard and Final Four Most Outstanding Player Kyle Guy announced he will stay in the NBA Draft, joining fellow class-of-2016 recruits Ty Jerome and De’Andre Hunter as those opting to pursue a professional career instead of returning to Charlottesville. Mamadi Diakite’s decision awaits.

The other development Monday, though not as major, was the departure of Marco Anthony, who entered his name in the transfer portal. Anthony, who played two seasons at Virginia, was never a major part of the Virginia rotation this season, and the 6-foot-4, 212-pound guard will look for an opportunity elsewhere.

The developments of the past two weeks leaves Virginia very much shorthanded in the backcourt. Of the Cavaliers’ four minutes per game leaders — Guy, Jerome, Hunter and Kihei Clark — three are gone. Virginia was so often successful because they could play those four guards at once and have the ball-handling (Jerome and Clark), quickness (Clark), size (Jerome and Hunter), individual scoring (Jerome, Guy and Hunter) and defense (all four, but especially Clark and Hunter) to match up well with any opponent. Adding in Diakite, a very athletic big man, made for a very good and versatile lineup.

The Cavaliers got an important commitment in the form of forward Justin McKoy last Monday. He’ll join guard Casey Morsell and center Kadin Shedrick in the Cavaliers’ impressive 2019 class. Morsell, a 6-foot-2, 195-pound shooting guard, will almost certainly see big minutes right away, and the same can be said for McKoy, who at 6-foot-8 and 225 pounds likely falls into a Hunter-esque role alongside fellow wing Braxton Key. Shedrick will likely redshirt, given the logjam for frontcourt minutes and his need to put on weight.

Right now, this is what a 2019 depth chart could look like for Virginia.

Of course, there could be some minor tinkering here or there, but most of that tinkering comes in the frontcourt. For example, Diakite and Huff could play together and Key could come off the bench as a versatile wing, as he did throughout much of the 2018-2019 season. That doesn’t really matter nearly as much as the left side of that chart. There’s one point guard and one shooting guard right now (depending on how Stattmann is viewed — certainly not a true backcourt player at this point).

That most certainly will not be the case six months from now. It simply can’t be. Tony Bennett and his staff have three scholarships to fill, and there’s a very good chance at least one goes to a transfer who can play immediately. Two offseasons ago, Bennett dipped into the grad transfer market in the form of Nigel Johnson. The situation then was similar, at least from a numbers perspective, to the one he faces now. Following the graduation of London Perrantes, Bennett had just two true backcourt guards in then-sophomores Jerome and Guy. Right now, he also has just two guards — Clark and Morsell — but just one who has any college experience. Morsell will undoubtedly have a lot of responsibility on his shoulders as a true freshman.

But Bennett will make sure he doesn’t put too much on Morsell’s plate. Since Bennett took over in Charlottesville, only four true freshman backcourt players, Joe Harris, K.T. Harrell, Malcolm Brogdon and Clark, have averaged more than 20 minutes per game. Of course, this is an extenuating circumstance for Bennett, so Morsell will likely join that group.

The backcourt right now is extremely young, too. In Bennett’s tenure, he’s always had an older guard to mentor the younger one. First it was Jontel Evans, who mentored Brogdon. Then Brogdon mentored Perrantes. Even in 2017, when the Cavaliers lost four key players to graduation, Jerome and Guy were able to take secondary roles behind established veterans Perrantes and Devon Hall. This year’s youngsters won’t have that luxury. They’ll be thrown into the fire immediately. As it stands, Clark, a sophomore-to-be, is the most experienced Cavalier ballhandler.

Who exactly Bennett pursues among grad transfers — and it could be more than one — remains to be determined, but some sort of guard is a necessity. A second route could be to pick up an unsigned 2019 guard prospect, but the Cavaliers currently do not have any offers to such players, per 247Sports.

As far as transfers who would not be immediately eligible go, the Cavaliers have already been closely linked with brothers Sam and Joey Hauser, both formerly of Marquette. The two are a package deal, which has obvious benefits and some downsides. In the short-term it would severely limit Virginia’s depth given Shedrick will likely redshirt as well. The Cavaliers would very much carry a short bench, and even one injury would be a major issue. They both play forward. In the long term, though, the Cavaliers would be adding two terrific offensive talents to what could end up being a very strong 2020-2021 club.

In the immediate future, Bennett has a tough task ahead of him, but he has a great pitch to make to whomever he pursues. The Cavaliers can promise a prominent role, if not a starting one, on a high-level ACC program now with a national championship attached to its name. To those with NBA aspirations, he can boast about the very reason he’s in this position: three players leaving early for the league.

For Virginia, this is unprecedented roster turnover following unprecedented accomplishment. Three seasons ago, the Cavaliers lost four scholarship players yet managed to turn around the next year and make the NCAA Tournament as a No. 4 seed. This year, they’ve lost five such players and have significantly less experience returning, especially in the backcourt. But they also have a better pitch and now a championship to prove it.