norfolk tides even series at durham with 6 3 win
Sports

Norfolk Tides even series at Durham with 6-3 win 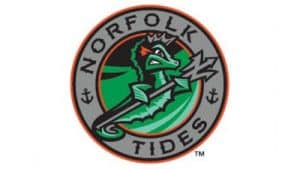 Durham scored three runs in the third inning, with help from back-to-back home runs by Ruben Cardenas and Vidal Brujan. Those would be the only runs Tides starter Chris Vallimont allowed, where he ended up lasting 6.2 innings and gave up five hits and two walks while striking out seven.

Norfolk tied the game in the top of the sixth, which included two RBI singles by Jordan Westburg and Tyler Nevin. Westburg then hit the go-ahead RBI in the seventh to make it 4-3. The Tides’ final two runs came in the eighth when Colton Cowser led the inning off with a home run and was later followed by Cadyn Grenier capping the score at 6-3 with an RBI double.

Nick Vespi recorded his eighth save of the season to seal the win. Game five of the series set for tomorrow night with first pitch at 6:35 p.m. The Tides will throw LHP Bruce Zimmermann (5-2, 3.71), while Durham has not announced a starter.

View all posts by Sports Desk