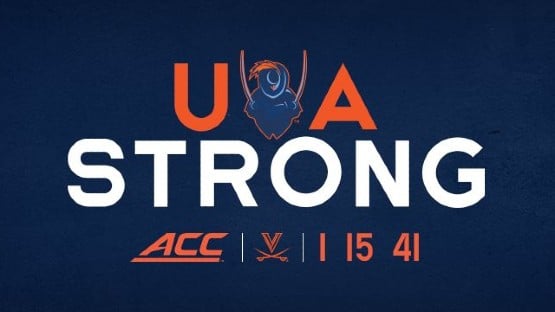 The UVA-Virginia Tech game scheduled for Saturday has been cancelled, according to an email Monday night from the ACC.

This not-unexpected news comes as the University of Virginia continues to deal with the emotional fallout from the Nov. 13 shooting deaths of UVA football student-athletes Devin Chandler, Lavel Davis Jr. and D’Sean Perry.

The announcement that the season finale had been cancelled comes on the heels of rampant speculation online during the day about rumors of efforts by the two schools and the ACC to move the game back a week, to Saturday, Dec. 3.

All we know about the final call on the game is that the ACC, in its email, said the decision to cancel the scheduled season finale was made following communication between the conference and the two schools’ athletics departments.

Virginia moved last week to cancel its scheduled game with Coastal Carolina in the wake of the mass shooting that claimed the lives of Chandler, Davis and Perry.

Both Hollins and Morgan survived the shooting and are now out of the hospital.

With the finale cancelled, Virginia Tech will finish its first season under coach Brent Pry with a 3-8 record after the Hokies edged Liberty, 23-22, on Saturday in Lynchburg.

Virginia finishes its first season under coach Tony Elliott with a 3-7 record.

Virginia’s unemployment insurance fund trust fund is solvent, which is newsworthy because for the past couple of years, there had been questions there, because of the pressure from the COVID pandemic.

New walking trails being developed on the campus of Bridgewater Retirement Community will work in line with the town’s plans.