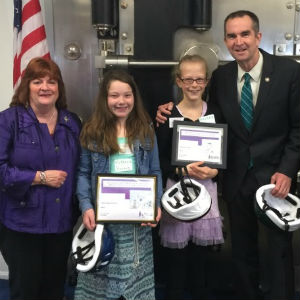 Children came from Chesapeake, Alexandria, Chester, Waynesboro and Chase City. The Epilepsy Foundation of Virginia has held the Use a Helmet Prevent Epilepsy contest for 22 years to increase awareness about bicycle accidents and prevent epilepsy.

The certificates and helmets were presented by Northam and Epilepsy Foundation of Virginia President Dr. Stacey Epps. At the event was also Julie Turner, a fourth-grade teacher in Waynesboro who had her children participate.

According to government figures, there was a 2 percent increase from 2012 in fatal accidents with bicycles. Bicyclist deaths overall are down 26 percent since 1975.

“The Epilepsy Foundation of Virginia aims at reducing the number of accidents that result in fatalities or severe brain injury to zero,” Epps said. “That is why we start with educating every 4 the grade teacher in Virginia, so the teachers inform  the children and the children instruct their parents to wear helmets as well.”

The winning drawings will be part of an Epilepsy Foundation of Virginia school calendar 2016/2017, which will be sent to schools, libraries and pediatricians offices.