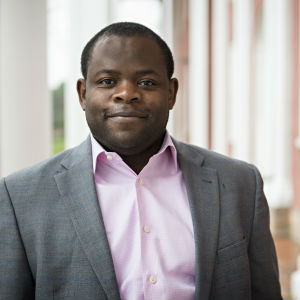 Blaise Buma, a December 2015 mathematics graduate of Washington and Lee University, has been selected for the inaugural class of 111 Schwarzman Scholars, a one-year master’s program at China’s Tsinghua University inspired by the Rhodes Scholarships program at the University of Oxford.

Buma, who also attended a year abroad at the London School of Economics and Political Science, will study public policy, economics, business and international studies. He will be immersed in an international community of thinkers, innovators and senior leaders in business, politics and society at Tsinghua, a leading Chinese university and the base of the country’s scientific and technological research.

He was chosen from more than 3,000 applicants worldwide for his intellectual and academic ability, leadership potential, strength of character, ability to anticipate emerging trends and desire to understand other cultures, perspectives and positions. The goal of the program is to promote international understanding and peace and meet the challenges of the 21st century and beyond.

“This class of Schwarzman Scholars represents a remarkable group of individuals who are committed to broadening their world view, undertaking new challenges and risks, and developing an understanding of China necessary to lead in the future,” said Schwarzman Scholars Global Director of Admissions Rob Garris. “These 111 Scholars represent the first members of a constantly expanding network of future global leaders, who together will have a tremendous impact on the world.”

The scholarship is fully funded for all participants, including travel costs and a personal stipend. It is supported by the program’s $375 million endowment. New support for the program has come from a prestigious global list of donors, including PepsiCo Foundation, Volkswagen, Johnson & Johnson, Econet Foundation, Lenovo and the Varkey Foundation. Scholars will live and study together at Schwarzman College, a dedicated, state-of-the-art academic and residential building built exclusively for the program.

Buma is fluent in English and French, as well as Mungaka and Mubako, two of hundreds of languages spoken in his native Cameroon. His interests in politics, economics and international affairs — particularly the Israeli-Palestinian relations, China’s economic forays in Africa and Russian geopolitical interests — inspired his involvement in two world peace organizations as well as two internships with leading world financial companies.

As an undergraduate at W&L, Buma raised $6,000 to attend the summit of One Young World, a UK-based not-for-profit that encourages young people from around the world to gather and debate, formulate and share innovative solutions for pressing international issues. He remains active in the organization, serving as its global ambassador for North America, and was chosen to address other delegates and world leaders including former French President Nicolas Sarkozy and Archbishop Desmond Tutu.

Buma spent summer 2012 with Deutsche Bank AG in London, working as an analyst on the equity structuring and cash sales desk and presenting investment theses for companies that included AIG and Avon. He also analyzed the Greek debt crisis and suggested possible restructuring scenarios that could return the Greek government to solvency. He worked summer 2015 with Goldman Sachs Group in New York as a sales and trading intern on the Index Volatility Trading Desk and the U.S. Collateralized Loan Obligation Structuring Desk. He stayed on with the company and serves as Goldman Sachs Campus Ambassador, helping the firm source talent at colleges and universities.

The scholarship program is named for Blackstone co-founder Stephen A. Schwarzman, who contributed $100 million and is leading a campaign to raise an additional $350 million from private sources to endow it. The program’s leaders hope to support up to 200 scholars.