virginia tech meteorologist on ian hunker down for the weekend
Local

Hurricane Ian is likely to make landfall in Florida soon as a category 4 or 5 storm with strong winds and heavy rain.

In Virginia, impacts will likely be felt late Friday or early Saturday, according to Stephanie Zick, an assistant professor of geography at Virginia Tech and meteorologist in the College of Natural Resources and Environment.

From her office in Blacksburg, Zick said they are already seeing cloud cover which will influence temperatures.

“Most of the state is probably not going to see tropical storm force winds,” she said, “but some of the state might.”

When you hear hurricane or tropical storm, most people immediately assume it will impact the coastal areas, but most of the impacts of this storm, Zick said, will be inland, particularly near mountain ranges.

“Southwest Virginia might see some of the strongest winds,” she said. “We might have some coastal flooding – heavy surf and some higher tides.

“The entire state is going to get a fair bit of rain,” she said.

She projects most of the state will see anywhere from 3-5 inches of rain. We will likely see 6+ inches in eastern Virginia and in isolated regions in the mountains, she said. Northern Virginia and Washington, D.C. won’t get as much rain as other parts of the state.

It’s possible cold air near the surface could limit the amount of precipitation, she said.

“This storm doesn’t have very good steering,” she said. “If you’re in a river, the current carries things along. Winds in the atmosphere steer a storm in a similar way, and the steering is kind of weak, which is why it’s slowing down so much now.”

As far as wind projections, in Eastern Virginia and Southside Virginia, winds will pick up a little earlier on Friday, gusting to about 30 mph. In the mountains, Zick said, we will see wind gusts peaking at around 40 mph at higher elevations on Saturday.

Fall festivals up in the air

At a time of year when Virginians are busy apple picking and visiting farm markets to find the perfect pumpkin, the heavy rain may bring a halt to normal seasonal activities including local festivals.

Virginia Beach has cancelled their annual Neptune Festival held on the boardwalk due to the projected forecast.

Dayton Days announced today that the one-day festival is postponed until Oct. 8.

Waynesboro’s Apple Days, scheduled for Saturday and Sunday, has postponed their festival until Oct. 15-16.

“Three inches of rain is certainly a lot,” Zick said. “If it were me, I wouldn’t be going to fall festivals. I’d just hunker down for the weekend and plan to stay inside.”

Her husband is running the Hokie half marathon on Sunday, so they won’t be hunkering down, she said. 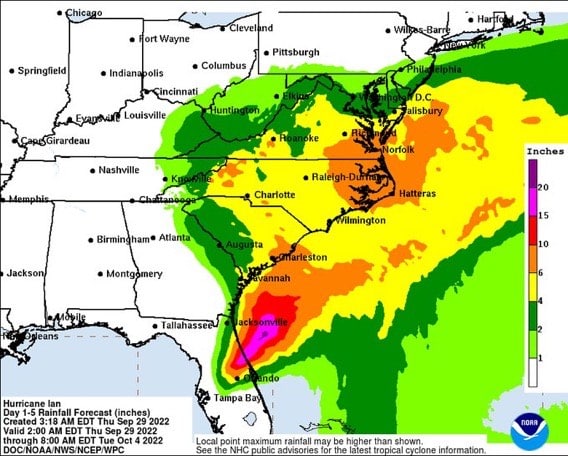 Flash flooding is a concern with this type of storm.

“Inland flooding has been more impactful with hurricanes,” Zick said. “The majority of deaths are from inland flooding.”

Coastal areas do a good job getting the word out and handling evacuations.

Looking ahead to the rest of hurricane season, Zick said that it is ramping up.

In the Atlantic and other basins, once the switch gets turned on, it becomes more favorable for the next storm as the atmosphere is more primed for another storm.

Behind Ian, she said, there will be some cooler water. She said it will take a couple weeks for it to recover – but then, it will restore itself.

“As we move into October, there should be fewer storms.”