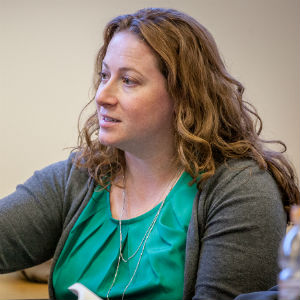 To complete her doctoral dissertation, Peck-McClain is examining how the words of the Apostle Paul, written in the mid to late 50s A.D., speak to the lives of modern American adolescent girls such as the 24 she interviewed. And she’s getting significant help from the American Association of University Women (AAUW) to do so.

She has received a one-year AAUW stipend for financial support as she finishes the dissertation, the final requirement towards earning a doctorate of theology in Christian education and New Testament from Duke Divinity School.

McClain recently moved to Harrisonburg, Virginia, from New York, where she had pastored three churches as an ordained Methodist minister. Her husband the Rev. Andrew Peck-McClain is a pastor at Mount Clinton United Methodist Church, a few miles west of Harrisonburg.

In August 2015, following the completion of her degree, she will become an assistant professor of Christian formation, preaching and worship, according to Michael King, PhD, vice president and seminary dean.

Within a prestigious group

Peck-McClain joins a select group of women scholars to earn a fellowship for the completion of a doctoral dissertation. AAUW projects must promote education and equity for girls and women.

The first American Fellowship was awarded in 1888 to writer and historian Ida Street, a graduate of Vassar College and the University of Michigan.

“These are life-changing awards,” said Gloria Blackwell, AAUW vice president of fellowships, grants, and global programs. “We’re so proud to continue this wonderful legacy and to salute this new class of fellows and grantees. They now join the ranks of Nobel Prize winners, celebrated authors, social entrepreneurs, and prominent scholars who have used AAUW funding to advance equality for women and girls.”

Peck-McClain’s dissertation is rooted in both an affinity for the writings of Paul and her long experience in youth ministry, specifically in her work with adolescent girls.

“In churches everywhere I went, I saw girls struggling,” she said. “They had problems with their body image or with cutting themselves or they had eating disorders or substance abuse problems. I wanted the church to have a response to that and to help girls lead their lives in a different way that might help them survive and thrive… Once I started feeling called to doctoral work, then I saw a way to that these two could speak together, these girls who had walked with me and this scripture that speaks to my heart … I am reading Paul and reading the lives of adolescent girls next to each other and seeing how they speak to each other.”

Peck-McClain’s research involved 24 interviews with teenaged girls, all active members of the United Methodist Church in New York. She was specifically interested, she said, in “what they liked and didn’t like about their churches, the times when their church provided a meaningful experience, their experiences of the holy.”

At a time when many millennials are leaving organized religion, the church seems to overlook their singular gifts.  “Adolescent girls have an amazing strength and a perspective the church could really benefit from, but is missing,” she says. “I hope my work can help encourage the church to receive the gifts the girls bring with them, and also help churches reach out to young people, especially girls, in a way that empowers and fulfills them.”

Peck-McClain earned a BA in religion from Washington and Lee University in 2002 and a master of divinity from Union Theological Seminary in New York City in 2005.