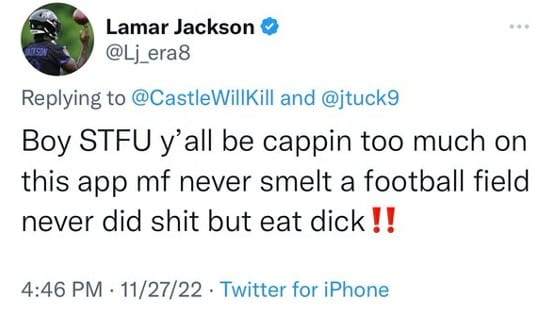 Baltimore Ravens QB Lamar Jackson went full-out anti-gay in an angry post-loss tweet, then blasted an ESPN reporter who called him out on it, using the legal term “defamation of character” in his defense.

Sorry, but actually, no, actually, not sorry, Lamar, because there is no defense for you here.

This stupid saga started with Jackson, a former league MVP, making the rookie mistake of responding to a dolt on Twitter who suggested that he isn’t worth the reported $250 million in guaranteed money that he is seeking with his next deal.

“Let Lamar walk and spend that money on a well-rounded team,” the Twitter nobody, a guy going by the CB handle Castlewillkill, wrote.

Jackson’s response was about as anti-gay as you can get.

“Boy STFU y’all be cappin too much on this app mf never smelt a football field never did shit but eat dick,” Jackson wrote.

The tweet was up for more than three hours before Jackson deleted it, but of course, you can’t ever just delete something from the internet and expect it to go away.

The ESPN reporter here, Jamison Hensley, wrote a column on the situation, “Ravens QB Lamar Jackson deletes vulgar tweet blasting critic,” referring in the first line of the column to the deleted tweet as being “anti-gay.”

Jackson, compounding his rookie mistake with another one, clapped back at Hensley.

“This is Defamation of my character, because not once have I ever mentioned or disrespect anyone’s Sexuality, sexual orientation, gender, Religion, or Race. Your reaching,” Jackson tweeted.

Ravens coach John Harbaugh addressed the matter with reporters on Monday, saying the comments from Jackson are “out of character,” and trying to frame the issue as being more about Twitter than about Jackson spewing hate.

“[I] just beg guys to not to get into the Twitter world right after the game, especially after a loss. It’s never going to be positive. It’s not going be a nice place, you know?” Harbaugh said.

“You all have seen him the way he treats people, the way he treats kids, the way he treats the media. And he is also one of the biggest competitors I’ve ever met. So, those kind of conversations, he takes very seriously. You get trapped sometimes by someone that’s baiting you just a little bit. And you can’t live there. I think that’s not a place he wants to be, and that’s certainly not things that he wants to say.”

Harbaugh is trying to say here that Jackson was baited into responding to a rando on Twitter that he “never did shit but eat dick.”

The no-name on Twitter was expressing a dumb opinion on Jackson’s protracted contract situation.

That Jackson’s first instinct was to respond with a vulgar anti-gay putdown says all you need to know about where he is as a person right now.

It shouldn’t take the Ravens or the NFL coming down on him to get him to realize that he needs to get away from the juvenile mindset that it’s OK to use anti-gay slurs as putdowns.

This is something that Jackson can address with himself, and we can hope that he does, though his initial response – to attack a reporter for calling him out on it – isn’t promising to that end.

By the way, Ravens, come on, pay the man already.