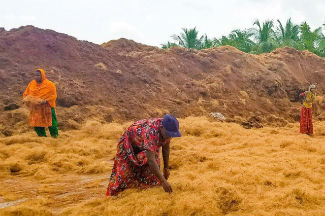 Trichoderma, a fungus, and cocopith, the dust of a coconut, both stimulate healthy plant growth and limit the need for pesticides. The Feed the Future Innovation Lab for Integrated Pest Management has long promoted the two natural solutions in India, Bangladesh, and Nepal.

But persistent factors keep some farmers from getting on board.

“Oftentimes, farmers have to take a risk when applying natural solutions and breaking from their usual methods,” Innovation Lab Director Muni Muniappan said. “This research will help us reach communities through agricultural practices tailored to their means and abilities. The tendency is to scale up innovation, but there are important steps that should come before that.
The study, jointly led by the Office of Economic Development in the three countries, identifies what keeps the two sustainable products from getting off the ground and seeks to pinpoint what incentivizes farmers, manufacturers, and others in developing countries to adopt them.

Farmers and product manufacturers involved in the study claimed that maintaining Trichoderma and cocopith can result in new labor challenges. While Trichoderma protects plants from disease, the fungus can be difficult to store and handle, and access to training in rural communities can be limited.

Similarly, while cocopith is a growing medium that establishes healthy plant roots, the research showed that weather is a factor that limits its adoption. Drought restricts coconut supply in many areas, while in others, substantial rainfall and unavailable land keep manufacturers from processing the materials.

Those interviewed also disclosed that taking action before a pest or disease appears feels like a gamble. Applying pesticides – despite their threat to human, animal, and environmental health – is a seemingly immediate solution to crop damage and a difficult norm to break, they said. A Trichoderma manufacturer, for instance, said, “They [farmers] want a quick result, because their profitability will matter in 60 days or 30 days.”

A further constraint is that registration for natural products in developing countries is a challenging, lengthy process, and at times impossible to carry out.

Factors that contribute to the success of sustainable agricultural methods include marketing, the study showed. Case in point: Entrepreneurial farmers in Nepal whose job it is to promote natural solutions elicited a major spike in adoption of the two products compared with India and Bangladesh.

The research also revealed that using the two products – the fungus and coconut dust – to promote healthy seedling growth made farmers more likely to use seedlings grown in plastic trays, which in turn boosted development of the plant nursery industry. Expectedly, farmers earned higher yields and profits by planting healthier seedlings, but the nursery boom also led to an unintended outcome. Women who were previously underemployed gained stable, year-round employment from the emerging nurseries.

In fact, in all three countries, the study showed that women are at the forefront of implementing Trichoderma and cocopith for use in the field, and they make up the majority of scientists developing and studying Trichoderma in laboratories as well. In Bangladesh, one woman, Rebeka Sultana, employs mostly women and operates the foremost organization providing the fungus.

“What we find in much of our work in Virginia, especially in rural areas, is that when people who were previously underemployed obtain stable higher wage employment, it can contribute not just to economic growth, but also to community viability,” Travis said.

The Innovation Lab plans to use the results from the study to design and implement more accessible, community-driven food-security initiatives.

The Innovation Lab plans to use the results from the study to design and implement more accessible, community-driven food-security initiatives.