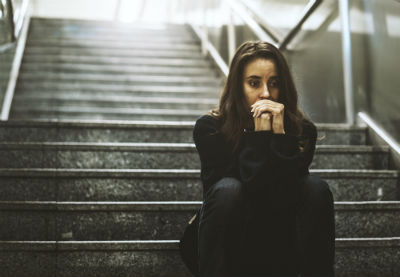 Findings of a Swedish population study suggest that the likelihood of suicide attempts can be transmitted from generation to generation in families and that nature and nurture both play a role, according to an American Journal of Psychiatry paper published Friday by authors from Virginia Commonwealth University and Lund University.

“Genes play a significant role, especially in suicide attempt, but they’re by no means the sole reason why it runs in families. Suicidal behavior can also be culturally or psychologically transmitted from their family relatives,” said the study’s lead author, Kenneth S. Kendler, M.D., director of the Virginia Institute for Psychiatric and Behavioral Genetics at VCU. “These findings give a richer picture that this is not only our genes governing our action: This kind of behavior is complex and originates from a mixture of genetic inheritance and the environmental experiences we have.”

Kendler, a professor and eminent scholar in the Department of Psychiatry at the VCU School of Medicine, said the study is one of the most comprehensive to look at parent-child transmission of suicide attempts and suicide deaths. Many past studies have looked at rates between twins or other siblings.

This Swedish population study compared four types of families: intact nuclear families, families where the biological father did not live with the family, families with a stepfather, and adoptees and their biological and adoptive parents.

While researchers noted a moderately lower correlation of suicide attempt where the father did not live with the family or where a stepfather helped raise a child, overall they observed that parent-child transmission of suicide attempt was nearly equal parts nature (genetics) and nurture (rearing environment) across all other family types.

In controlling for other potential reasons for suicidal behavior, such as factors stemming from mental illness, Kendler said the researchers found there is something particular about vulnerability to suicide attempt that runs in families, regardless of whether psychiatric or substance-use disorders run in those families.

“[We asked], ‘What happens if we control for all the background transmission of the psychiatric disorders — how much does the genetic transmission of suicide decline?’ And the answer is almost half, 40% to be precise,” Kendler said. “That certainly answers the question pretty clearly that, ‘No, suicide doesn’t run from parent to child completely through alcoholism, depression, schizophrenia or other mental illness.’”

The researchers also found that the nature of a parent transmitting risk to a child is not the same for suicide attempt as it is for suicide death.

The researchers also found that, in the three family types that were not adoptive, the transmission of suicide attempts was stronger to sons than to daughters.

“The findings of this study underscore the importance of our health care providers’ role to pay careful attention to the warning signs of suicide, including family medical history, when we talk to patients,” said Peter Buckley, M.D., interim CEO of VCU Health System, interim senior vice president of VCU Health Sciences and dean of the School of Medicine. “It is remarkable the strides Dr. Kendler and his team have made in advancing the medical community’s understanding of the impact that things like genetics, addiction, mental illness, family relationships and home environment can have on a person’s health.”

This work was done in close collaboration with senior author Alexis Edwards, Ph.D., also of VCU. Other co-authors on the research team were Henrik Ohlsson, Ph.D., of Lund University in Sweden; senior author Kristina Sundquist, M.D., Ph.D., of Lund and Icahn School of Medicine at Mount Sinai in New York; and Jan Sundquist, M.D., Ph.D., of Lund and Icahn. The success of this study depended critically on the high-quality, long-term collaboration established between the VCU team led by Kendler and Edwards and the team led by Kristina Sundquist at Lund University in Sweden.

These authors have collaborated on numerous Swedish population studies through work funded by the National Institute of Mental Health, a division of the National Institutes of Health, the Swedish Research Council and Region Skane in Sweden. Their published research has included studies of suicide risk related to alcohol-use disorder, risk of major depression based on home rearing environment and parent-child transmission of bipolar disorder and other psychiatric disorders.

If you or someone you know might be at risk of suicide, call the National Suicide Prevention Lifeline at 1 (800) 273-8255. The lifeline provides free, confidential support 24 hours a day, seven days a week for people in suicidal crisis or distress.