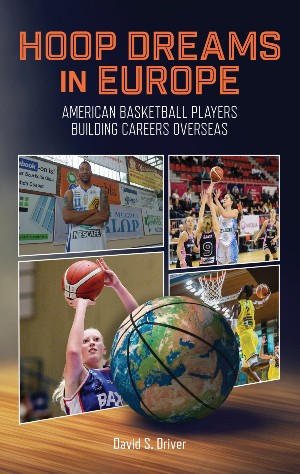 A year ago, Galin Smith was playing in March Madness with the University of Maryland in the NCAA tournament.

Now he is a first-year pro with a team in Sweden, with his latest game on March 8 in the top league in that European country.

The story of Smith and many other Americans is featured in Hoop Dreams In Europe: American Basketball Players Building Careers Overseas by David Driver, a native of Harrisonburg and the former sports editor of the Daily News-Record in Harrisonburg, the Arlington Courier, and the Baltimore Examiner.

Driver is a graduate of Turner Ashby High in Rockingham County and a 1985 graduate of Eastern Mennonite University.

With March Madness about to begin, Driver catches up with some Americans whose careers have fallen off the map for some hoop fans – only because they are playing overseas.

Driver and his family lived in Hungary for three years and for the past 15 years has made return trips to that country and others in Europe. He has interviewed American men and women basketball players in 18 countries in Europe, with the most recent trip to Spain last October. On that trip, he saw two pro games in the women’s league and did stories on University of North Carolina graduate Taylor Koenen and Minnesota graduate Leslie Knight, who recently announced her retirement after playing in Spain since 2009.

Driver also was in Russia in 2018 and published a story for an alumni magazine on Errick McCollum, the brother of NBA star C.J. McCollum, who has played several years in Russia, including this season.

“I am not aware of a book that has this much content about American women playing pro basketball overseas, and especially in Europe,” Driver notes.

Here is what others are saying about the book:

Augusta Free Press, which has published numerous sports books, did the inside layout for the book while Maryland resident Russell Nemec designed and implemented the colorful front and back cover.

The book is available now on Amazon or through the author at [email protected] or www.daytondavid.com.