Nonnative species that are introduced into ecosystems are a growing concern for scientists and conservationists because these species can potentially suppress vital native species, alter food-web dynamics, and threaten biodiversity. 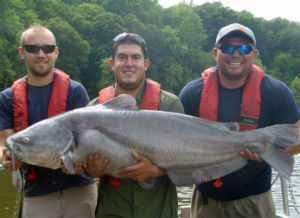 Virginia Tech researchers, left to right, Joseph Schmitt, Jason Emmel, and Zach Moran hold a blue catfish caught for testing before releasing it unharmed back into the James River. Photo by Donald Orth.

When concerns about the negative effects of nonnative catfish on native fish species in Virginia’s rivers began to arise, researchers from Virginia Tech’s College of Natural Resources and Environment and the Virginia Department of Game and Inland Fisheries decided to explore whether these catfish are really to blame for declining native fish populations.

Joseph Schmitt of Mechanicsville, Virginia, a doctoral student in fish and wildlife conservation in the College of Natural Resources and Environment, and other investigators recently published a study on predation of native fish species in the James River by nonnative catfish in the journal Marine and Coastal Fisheries: Dynamics, Management, and Ecosystem Science.

The study examines whether introduced catfish are preying heavily upon depleted native species including American shad, blueback herring, and alewife — species that once supported major fisheries along the Atlantic coast.

“There were several people claiming anecdotally that catfish were ‘decimating’ American shad, blueback herring, and alewife populations, yet no studies had been published in the scientific literature,” Schmitt said.

According to Schmitt, American shad has been called “America’s founding fish” owing to its importance as a colonial food source. Prior to the 1980s, American shad supported lucrative commercial fisheries in Virginia; however, factors including overfishing, bycatch from offshore fisheries, barriers to migration, and predation have all played a role in the dramatic decline of this and other similar species.

Nonnative blue catfish and flathead catfish are both large, long-lived species that thrive in murky, nutrient-rich rivers. Blue catfish were introduced into Virginia tributaries of the Chesapeake Bay during the 1970s and 1980s to create new fishing opportunities at a time when many fisheries had collapsed or were on the brink of collapse. While no one knows who was responsible for stocking flathead catfish in the James River, they are now established in the James, Potomac, Susquehanna, and York River drainages.

To determine whether predation by these two catfish species is a major cause in the decline of American shad, blueback herring, and alewife, researchers used a technique called low-frequency electrofishing, which uses electricity to stun fish. Schmitt explained that catfish are particularly susceptible to this method of fishing.

“The electricity stuns them, and they rise to the surface and begin swimming erratically for a minute or two,” Schmitt explained.

Once a fish was netted, a team member shot a stream of pressurized water into its stomach, making it regurgitate whatever it had eaten. The fish was then returned to the river, unharmed. Later, in the lab, DNA testing enabled the team to identify the digested fish remains and determine which species the catfish were preying on.

He pointed out that the procedure, called gastric lavage, is commonly used and that the team’s protocol had been approved as safe.

In the spring of 2014 and 2015, Schmitt and his team spent three to four days each week working on the river and caught approximately 2,500 catfish. They found that, despite popular assumptions that blue catfish were doing the most damage to American shad, blueback herring, and alewife populations, these species were found in the stomachs of only 4.46 percent of blue catfish tested. The same three species were found in the stomachs of 17 percent of the flathead catfish tested.

While the researchers found that the catfish tested were indeed preying on American shad, blueback herring, and alewife, Schmitt explained that populations of the three species had begun to crash before the nonnative catfish were introduced into the ecosystem, so catfish predation can’t be considered the main cause of their decline.

“Other factors besides predation are also at play, including habitat degradation, bycatch from offshore fisheries, migration barriers like dams, and predation by other fish,” Schmitt said.

The published paper is part of a larger Virginia Department of Game and Inland Fisheries study to examine the position of blue catfish in the larger food web in the Chesapeake Bay, which will be finished in September. The larger study combines Schmitt’s work on catfish diets with research being conducted by Corbin Hilling of Morgantown, West Virginia, another Virginia Tech fish and wildlife conservation doctoral student, on catfish population characteristics.

Aaron Bunch, the Tidal Rivers Project Leader with the Virginia Department of Game and Inland Fisheries, co-authored the study with Schmitt and provided catfish stomach samples for analysis in the lab.

“The Department of Game and Inland Fisheries has data sets on Blue Catfish that date back to the 1990s, but we realized there were some data gaps that needed filling,” Bunch said. “This is one of the most solid catfish diet studies out there because of the sheer sample size.”

Bunch added that both studies have important implications for the Department of Game and Inland Fisheries’ management practices and restoration efforts.

“The best thing we can do as an agency is to use high-quality data to guide our management decisions,” he said. “Studies like this one from Virginia Tech can help us collect that data.”

Schmitt’s research was funded by a grant from Federal Aid in Sport Fish Restoration, administered by the Virginia Department of Game and Inland Fisheries. Outreach efforts, including a website and blog to communicate about the role of nonnative catfish, were funded by Virginia Sea Grant.

In addition to Schmitt and Bunch, co-authors of the study include Eric Hallerman, professor of fisheries and affiliate of the Fralin Life Science Institute; Donald Orth, the Thomas H. Jones Professor of Fisheries and Wildlife Sciences; Zach Moran, who earned his bachelor’s in biological sciences from Virginia Tech’s College of Science in 2014; and Jason Emmel of Blacksburg, Virginia, a master’s student in fish and wildlife conservation.