West Virginia: Things to do and places to see 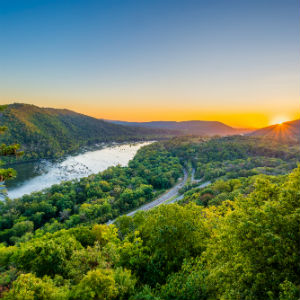 When John Denver sang Country Roads’ “almost heaven”, “misty taste of moonshine”, and “to the place I belong”, listeners couldn’t help but wish for one thing — to travel to West Virginia and experience for themselves the beauty that moved Denver so much.

Needless to say, West Virginia has a lot to offer for those driven by curiosity and adventure. From the endless beauty of the Blue Ridge Mountains to the vastness of the Shenandoah Valley, and from cities like Staunton, a revitalized Victorian downtown with six historic districts, to the Mothman Museum, a storefront museum dedicated to one of West Virginia’s most famous urban legend, the state is brimming with things to do and places to see. So let’s take a look at why West Virginia deserves its spot on your American culture trip just as much as the Grand Canyon in Arizona, the Vegas Strip in Nevada, and the Statue of Liberty in New York.

No, it’s not a brand new river “constructed” for tourism. Rather, New River is one of the oldest rivers on the continent. It flows into West Virginia by cutting through the Appalachian Plateau and forming the New River Gorge along the way. But while this majestic river is simply doing its thing, it has created a host of recreational activities in and around it.

For example, the river has plenty of whitewater for rafting, tubing, and canoeing. Moreover, visitors can enjoy hiking, hunting, ziplining, bird-watching, biking, camping, fishing, and rock climbing around the river.

The legend of Mothman was born in 1966 when two couples in a car outside Point Pleasant claimed to have been chased away by a seven feet tall, black figure with huge wings and red glowing eyes. The story developed over the years, mainly through claimed sightings, a book, and a movie, and Mothman turned into a famous urban legend.

Today, Point Pleasant boasts the world’s only Mothman Museum. This attraction features archival materials, police reports, press clippings, and props from the film, all at an inexpensive admission fee. You can also hit up the museum shop and pick something from a huge collection of Mothman souvenirs and memorabilia. Mothman Museum is open every day of the week.

Yeah, touring a place with history is fine. But what if the hotel you stay at oozed with historical landmarks and fun activities to do. That is what you’ll get is you stay at The Greenbrier. The hotel has hosted 26 presidents, foreign dignitaries, and even members of royalty, some of whom include the Duke and Duchess of Windsor, and Prince Rainier and Princess Grace of Monaco. The hotel itself is located at White Sulphur Springs, which have been in use as a natural spa since the 1700s.

But that’s not all. This grand hotel also has also been attached to many other historic events. The earliest was probably when it was used as a detention center for Japanese and German diplomats who were in the United States when World War II was declared. Later on, the hotel also served as a temporary hospital during the war where 25,000 patients were treated.

During the Cold War, an underground shelter was also constructed to safeguard the entire U.S. Congress in case of a nuclear attack. Today, the shelter has been made available for public tours, as is the Presidents’ Cottage Museum. If you book a room at the Greenbrier today, you can enjoy horseback riding, adventure courses, indoor and outdoor tennis courts, golf, fishing, swimming, bike riding, hiking, and camping in and nearby the hotel. For punters, the Greenbrier boasts The Casino Club that offers several gambling facilities including simulcast horse racing and associated betting. However, its casino offerings are only available for guests who have booked a room. If you’re only visiting The Greenbrier, you’ll have to be satisfied with your Vegas Mobile Casino games.

The abolitionist John Brown raided the United States arsenal at Harpers Ferry in 1859, he hastened the onset of the Civil War. Today, you can find a number of museums, historical exhibits, and programs at the Harpers Ferry National Historical Park. The town has the Appalachian Trail Visitors Center, from which you can take a hike on the Appalachian Trail for views of the rivers and town.

Harpers Ferry is also where the Shenandoah River meets the Potomac River. Visitors can explore where the rivers meet, and use the rocks to walk up to St. Peter’s Roman Catholic Church and the old cemetery on the hill behind it.

At the Cass Scenic Railroad State Park, you can experience what life was like for loggers who came centuries ago to clear-cut the mountains. You can ride in refurbished logging flat-cars pulled by an original Shay steam locomotive for a four and a half hour, 4,700 high trip that promises unforgettable scenes.

When done, you can get off at Whittaker Station and rent one of the restored company houses for a night or two. During the day, you can check out the 1940s logging camp that has been recreated at the site, complete with the living quarters and the equipment.