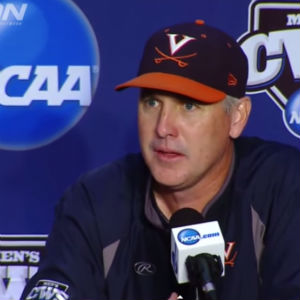 O’Connor spent nine seasons working as an assistant on Mainieri’s staff at Notre Dame from 1995-2003. While working together, the Irish posted an overall record of 399-160-1, won six conference championships and made six trips to the NCAA Tournament. Mainieri spent 12 seasons at Notre Dame before taking over at LSU in 2007.

O’Connor, who is entering his 15th season as the head coach at Virginia, is a five-time ACC Coach of the Year and three-time national coach of the yea. He has led the Cavaliers to 14 straight NCAA tournament appearances, including the program’s first National Championship in 2015. As a member of Hendry’s Creighton team that made it to the College World Series in 1991, O’Connor is one of just a handful of coaches that have both played and coached in the CWS. His 639-239-2 record at UVA gives him the third-highest winning percentage of all current head coaches in Division I baseball (72.7 percent) and he was the second fastest ACC coach to 500 career wins.

The 2018 Collegiate National Team will train at the USA Baseball National Training Complex in Cary, North Carolina, and compete against teams in the Coastal Plain League from June 26-27, before hosting the 18th USA vs. Chinese Taipei International Friendship Series from June 28-July 2. All seven of these games will be streamed live on USABaseball.com and Facebook Live.

The team will then host the 42nd USA vs. Japan Collegiate All-Star Series from July 3-9. Team USA will then travel to Cuba for the 7th Annual USA vs. Cuba International Friendship Series that will take place July 13-18.

The Cavaliers have placed nine players on the USA Collegiate National team including current junior outfielder Jake McCarthy who spent the summer with team USA in 2017.