UVA Football: ‘Hoos need to adjust to not having Bryce Hall 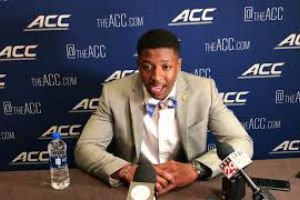 Bryce Hall is the best cover corner in college football, so obviously his absence will affect the UVA pass defense significantly going forward in 2019.

How else will Hall’s absence impact Virginia?

The first and most noticeable change is De’Vante Cross moves from free safety to boundary corner, after sliding over to corner to replace Hall when he went down on special teams in the second quarter of last week’s loss at Miami.

Coach Bronco Mendenhall also talked up Jaylon Baker, a redshirt freshman, who is listed at #2 at field corner on the depth chart this week, and Antonio Clary, a freshman who moves to #2 at free safety.

Mendenhall also emphasized that Hall’s absence will impact special teams. Hall was the captain of the kickoff and punt-return units, which is where he got hurt, to the consternation of some fans who have been filling up message boards and social media with criticisms of the coaching staff for having the team’s best NFL prospect on special teams.

“Our best players, we think every blade of grass matters, and we play, and they want to play in any capacity to help our team,” Mendenhall said, perhaps addressing those concerns.

Besides the X’s and O’s, there’s the emotional aspect to not having Hall in the lineup.

“Bryce was right in the core of that developing the simple idea that no one believed more than him. So, believe was what — he does believe in our program. He asked his teammates to do that. I think it was hard for us to keep the players away from him when he was out there. They wanted to surround him. They wanted to touch, support him. And they will,” Mendenhall said.

“So, yes, it hurts emotionally. Yes, it hurts in a lot of different ways, including tactically. But already how he’s handled it, he’s taught us a lot. I think it will end up helping our program at some point, at some time, in the new role that he has.”