United Nations of Comedy Tour returns to The Paramount 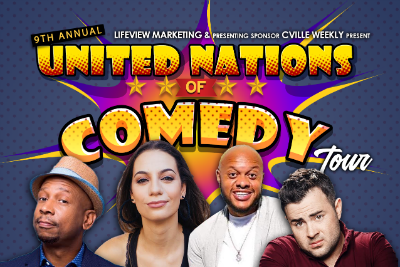 The United Nations of Comedy Tour returns to The Paramount Theater in Charlottesville on Saturday, Nov. 16 at 8 p.m.

This tour features national comedians as seen on NBC’s Last Comic Standing and Stand Up for Diversity, CONAN, Comedy Central, Comic View, HBO, Showtime, and other national programs. The United Nations of Comedy is one of the funniest national comedy tours to visit the area and has become one of the area’s most highly anticipated comedy events.

The tour was founded to promote diversity through laughter. Choosing the perfect blend of national comics by selecting an eclectic mix of styles is vital. This years lineup includes a hysterical array of comedians: headliner, Jay Phillips, Funnyman Skiba, Liz Miele, and Brendan Eyre. Jay Phillips is known is known for his appearances alongside of Will Ferrell in Semi Pro, Tina Fey in Baby Mama, Brittani Snow in Prom Night and many television appearances such as the DL Hughley Show, Fresh off the Boat and may others. Jay visited the Paramount Theater in 2013 and the audience would not allow him to leave the stage after four other comedians had already performed.

Now he returns from California for another star studded show.

The Paramount Theater was chosen as the host venue due to its historical significance, convenient location, and community driven mission. The theater’s stage has been visited by some of the top comedians and performers in the nation and the United Nations of Comedy continues its streak. The Paramount Theater is located at 215 East Main Street, Downtown (Downtown Mall).

Tickets are only $37.50 and on sale now. Get yours at the Paramount Box Office, charge by phone 434.979.1333, or online at: http://www.theparamount.net/event/lifeview-marketing-c-ville-weekly-present-9th-annual-united-nations-comedy-tour/ or www.UnitedNationsofComedy.com.

One hundred percent of the profits will support the making of America’s Darkest Future: The Cost of an Inaccessible Early Education, a non-profit documentary produced in partnership with Virginia Organizing, a statewide non-profit grassroot organization.