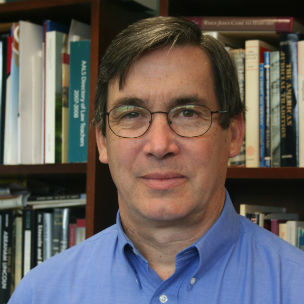 Sam Calhoun, Professor of Law and Associate Dean for Academic Affairs at Washington and Lee University School of Law, has been named the Class of 1960 Professor of Ethics. As the holder of a term professorship, Calhoun will have the position for a three-year period.

The Class of 1960 Professorship seeks to honor and recognize a W&L faculty member whose teaching and scholarship include ethics, honor, integrity, honesty and applications of ethical reasoning in addressing contemporary issues. In addition to teaching contracts, sales and legal writing, Calhoun teaches and researches on the legal and religious issues implicated by the controversy over abortion. His recent articles in this area have addressed the case of Philadelphia abortion provider Kermit Gosnell, as well as partial-birth abortion. He has also critiqued Justice Lewis F. Powell’s vote with the majority in Roe v. Wade.

“Sam Calhoun is an obvious and excellent choice for this prestigious term professorship,” said Provost Marc Conner. “As a scholar, a teacher and an academic citizen, his career at Washington and Lee has been defined by a commitment to and study of ethics and the interplay of religious belief and moral values in law and society.  I cannot think of a better person to inhabit the Class of 1960 Professorship in Ethics.”

“I am honored and very pleased by my selection as the Class of 1960 Professor of Ethics,” said Calhoun. “I look forward to helping promote programming that emphasizes the crucial significance of honor and integrity, values of particular importance to W&L.”

Calhoun joined the W&L Law faculty in 1978. He taught previously at the University of Wyoming and the University of Puget Sound. A highly-regarded teacher, Calhoun has twice been awarded with fellowships recognizing excellence in the classroom. In 2013, he spearheaded the W&L Law Review Symposium commemorating the fortieth anniversary of Roe v. Wade. Calhoun has also written about the role religion played in the beliefs and actions of Abraham Lincoln.

“Sam is uniquely well-suited to receive this honor,” said Brant Hellwig, Dean of the Law School. “Throughout his remarkable tenure of service to the Law School and the University, Sam has exemplified the traits the chaired professorship seeks to promote – ethics, honor, integrity and honesty.”

Calhoun is currently wrapping up a three-year stint as Associate Dean for Academic Affairs, where he spearheaded curricular initiatives, oversaw the staffing and scheduling of all law classes, served as the primary liaison between the faculty and dean of the law school, and coordinated preparation for the ABA’s fall 2015 reaccreditation inspection of the law school.

Prior to entering the legal academy, Calhoun was an associate with King & Spalding in Atlanta. He received his J.D. from the University of Georgia School of Law and his B.A. from Harvard.