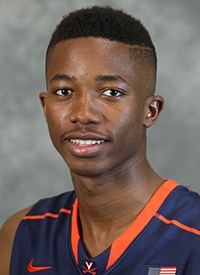 The story isn’t uncommon. Mamadi Diakite didn’t take up basketball until late in life compared to his college peers. A native of Guinea, Diakite’s first sport was soccer, and it was his height more than anything that led him to basketball.

Recently, though, Virginia has been looking to get him involved early.

On the first possession of the Notre Dame game, Diakite got good position, shielded off Irish freshman Nate Laczewski and finished with a soft touch high off the glass. A few minutes later, he set a screen for DeAndre Hunter and rolled to the hoop for a powerful dunk. On the very next possession, he skied over two Irish defenders, high-pointed a Hunter miss and finished the put-back through contact.

Five minutes into the game, Virginia had eight points. Six belonged to Diakite.

While Virginia’s top three scorers — Hunter, Kyle Guy and Ty Jerome — draw most of the attention, Diakite has been a crucial part of Virginia’s 6-1 start to ACC play. The springy big man is averaging 7.3 points per game and 4.9 rebounds per game in league action — both career highs — and dumped in a personal-best 18 points against Boston College in early January.

“I think he’s just more confident and more comfortable when he gets the ball in making the right plays,” Tony Bennett said on Monday’s ACC teleconference.

Those numbers may seem modest in a vacuum, but in Virginia’s slow-paced, low-possession games, they are quite significant. Diakite has shown the ability to knock down a face-up jumper by shooting 42.3 percent on jump shots, per Hoop-Math.com, which is up slightly from last year’s 40.9 percent. Diakite has also added the three-point shot to his repertoire, though in limited doses. After shooting zero long balls last year, he has taken 10 this season and connected on four, a very respectable number.

“He worked hard developing that touch — the outside shot,” Bennett said Monday. “That was always there, and I think it’s more of a threat now.”

Diakite’s natural athleticism and overall development have allowed Virginia to alter its offense somewhat to take advantage in the pick-and-roll setting.

“He’s long and athletic, and he can roll on the rim pretty hard, or he can even separate a little bit,” Bennett said Monday. “We are using more ball screens in certain ways with certain personnel packages on the floor, so I think he’s getting better at that — catching it and then making the simple, right play. I think it’s all of the above.”

In order to effectively measure Diakite’s impact, it’s worth looking at the other things big men can contribute and are especially important in Bennett’s system, too: offensive rebounding, blocking shots and defending without fouling. Diakite has made major leaps in those areas during his time in Charlottesville. Here are his ACC numbers year over year from KenPom.

Essentially, Diakite is making more high-impact plays while fouling less often. Bennett attributed that to Diakite moving his body and anticipated better, eliminating the need to try to recover by reaching in, which often results in fouls.

“Of course it’s experience, but it certainly has to do with balance, discipline, being in the right position [and] just know-how — where to be sound and not gamble or pick up unnecessary fouls,” Bennett said Monday. “Sometimes there’s just going to be fouls that are unavoidable, but I think eliminating some of the unnecessary fouls — I think that’s helped.”

Diakite’s skill set was on display all game against the Irish. He finished with 10 points, seven rebounds and a career-high four blocks.

“It is a special skill — to get it and keep it in play — and Mamadi was real quick off the floor, and he helped,” Bennett said Saturday. “He’s lively. That just adds another dimension to your defense when you can protect.”

Perhaps the most evident sign of Diakite’s development was the trust Bennett showed in his big man when Notre Dame tried to creep back into the game by relying on big man John Mooney and got the score to 54-42. Bennett took a timeout and reinserted Diakite in favor of Jack Salt. The Cavaliers scored the game’s next eight points, and the outcome was no longer in doubt. Mooney made just one of his six shots with Diakite back in the game and spent the final 5:52 of the game on the bench.

“I thought Mamadi was a key in this game when they cut it to 12 and we were having a little trouble,” Bennett said Saturday. “Mooney stepped out and hit a couple of threes. … It was a poor stretch, defensively, for us. I reinserted Mamadi back in, and his quickness, I thought, defensively allowed us to guard Mooney at the three point line, and then also he used his quickness and blocked some shots.”

Moving forward, Diakite has what should be an inviting matchup against an undersized NC State team and then a date with a struggling Miami team. If Diakite can continue to play at a high level at both ends, he’ll provide a needed boost down low — and occasionally from the perimeter — as Virginia prepares for its stretch run into tournament play.