Inside the Numbers: Dammit, stop apologizing for this Virginia team 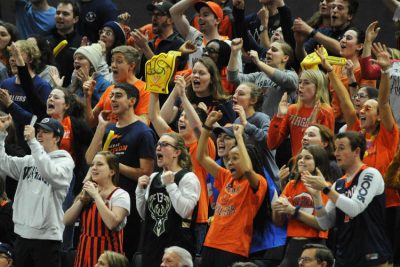 The Hoo Crew celebrates the final moments of the OT win. Photo by Dan Grogan.

Two of the losses: at Florida State, at Louisville, both Top 10 teams, both in games in which Virginia led late.

Seven losses this season, only one of them, that loss at Purdue, way back in December, was out of reach.

Granted, even the wins aren’t pretty.

Virginia is 211th nationally in adjusted offensive efficiency, per KenPom.com, still averaging less than a point (precisely .999) per possession on offense.

The defense: first in scoring, fourth nationally in points per possession.

This team: has stones.

In the recent five-game winning streak:

This team has 20 wins, 12 in the ACC, eight away from JPJ, after losing three guys early to the NBA draft.

We could easily be North Carolina right now, 4-13 in the conference, our coach cursing at pressers, when he isn’t telling reporters about how his team has no talent.

This team could legitimately win out and finish … third in the ACC?

It’s an election year. I’m voting for Tony Bennett for everything.