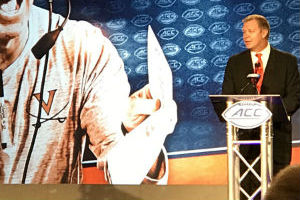 A reporter on Sunday’s ACC Championship game conference call tried to get UVA football coach Bronco Mendenhall to frame the ‘Hoos game with Clemson as David vs. Goliath.

Mendenhall wasn’t having any of it.

“I think that’s probably the case with anyone that Clemson has played this year. I don’t find us in any different situation,” said Mendenhall, whose team is, gulp, a 29-point underdog to the third-ranked Tigers, the defending national champs, who come in on a 27-game winning streak.

Fair point there from Mendenhall.

Note that both were back in September, which feels like an eternity ago in the context of this season.

Over their past seven games, the Tigers have had an average margin of victory of 41.7 points.

But, how to put this delicately: just three of those seven have winning records, and one of those three is Wofford, of the Southern Conference, at the FCS level.

Virginia isn’t in the running for CFP consideration or anything, but the Cavaliers have won nine games.

That may be what separates UVA from the recent list of Clemson victims.

The Cavaliers might not be good, but they’ve been, you know, good.

“The difference simply is that we’ve battled, scrapped and clawed our way to win our side of the division in a program that hasn’t known recent success and is hungry for more. The rest of it will be played out in the game,” Mendenhall said.

Another reporter tried to get Mendenhall to address the “daunting challenge” that his team faces playing Clemson.

Most coaches will give you the soundbite you’re looking for there.

“I don’t see the word as ‘daunting’. I see an amazing opportunity,” Mendenhall said. “The brutal fact acknowledgment, everyone else will draw that, come to their own conclusions that way. I see an amazing chance for my team, my coaches and my staff to try as hard as we can try to learn, grow, development and compete. That’s what we intend to do.”

The only daunting challenge with Mendenhall is to get him to agree that some obstacle up ahead can’t be overcome.

He’s not wired that way.

That attitude can be infectious.

“We know what’s at stake. We know the opportunity ahead of us. We know we’re playing a very, very good opponent. There’s definitely a different mindset,” defensive tackle Eli Hanback said.

“I mean, opportunities like this don’t happen every day,” linebacker Charles Snowden said. “To go up against the reigning national champs, ACC champs, it’s a great opportunity. You’re not going to find better talent than this in the country. I’m excited to get that opportunity.”

Again, this is what reporter types try to get guys to say.

And again, not having it.

“We always talk about unbroken growth in this program,” quarterback Bryce Perkins said. “Just think about last year, how close we were to actually winning the ACC and beating Tech. We felt we had the talent and the will last year. We just had to keep it going, keep improving from the mistakes from last year to this year.

“It wasn’t perfect this year. We had a couple ugly losses,” Perkins said. “The way we fought back, the way that we were resilient, is right on line with the program’s growth and the program’s culture that coach built these past years that he was here.”

“I don’t think we kind of necessarily have a schedule,” Snowden said. “I think our goal is just to improve every year. Whatever that improvement looks like is great. I wouldn’t say it would be ahead of schedule or behind schedule.

What you can gather from the questions is that those on the outside expect the Virginia side is just happy being part of the program’s first ACC Championship Game, with the attitude that, hey, nothing to lose here, right?

“I wouldn’t say nothing to lose. We’re going at it with no fear,” Snowden said. “We’ve had a great season so far. We’re just looking to build on that. We’re going to give it our best foot forward, surrender the outcome and let the chips fall where they may.”

You can almost see Mendenhall pulling out the measuring tape, a la “Hoosiers,” to remind his team that the field at Bank of America Stadium in Charlotte is just as wide and long as the field at Scott Stadium.

And actually, Bank of America Stadium was the scene of what was, until last week, the program’s biggest win under Mendenhall, the 28-0 Belk Bowl whitewash of South Carolina last December.

There was that win over an SEC team, the road win in 2017 at Boise State – the first big win in the Mendenhall era.

And of course, last week’s Streak-breaking win over Virginia Tech that landed Virginia in the ACC title game.

Mendenhall was asked if he thinks his team can draw upon those experiences to help it get ready for the challenge that lies ahead.

“Not so much. Our team is I would say pretty much over that,” Mendenhall said. “They want to win every single week. They believe they’re capable of performing against any opponent on any given week. Really the mindset has as much to do with outcome as anything.

“I’m really not looking to present points of reference for them as to things we’ve done in the past against other opponents. I’m really working on and just presenting to our team what can we control, what we can we influence, spending all of our time focusing on that. There aren’t any other points of reference against this team that are relevant.

“The other points of reference that have been mentioned, other games we played, it’s not this opponent, it’s not this stage. Really the only point that’s similar is the mindset we had going into those games in terms of our preparation.

The outcome Saturday night is obviously still to be determined.

Score the press conference a big win for the Virginia side, though.