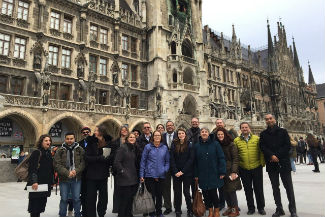 Members of the Virginia Tech team that developed a policy brief on refugee integration traveled to Munich as part of their research.

Virginia Tech will unveil a policy brief on refugee integration on Sept. 5, the first research on this subject to embrace an interdisciplinary and international approach.

The research is also distinctive because it focuses on less familiar aspects of the refugee condition: the journey from a state of war to a safer country; case processing; and resettlement and integration in new societies.

The introduction of the policy briefing will occur at 10 a.m. on Sept. 5 in the Newman Library Multipurpose Room. Sign up to attend the event.

“This research is timely and urgent given the staggering number of refugees worldwide and the growing bureaucratic backlogs that make people stay in refugee camps for years, sometimes decades,” said Jim Bohland, professor emeritus at the School of Public and International Affairs, which spearheaded the research partnership and study.

Estimates for 2017 put the number of displaced people around the world at more than 68 million.

The two-year study covers refugee integration cases in Europe, North America, Asia, Middle East, and Africa and was motivated by the spirit and vision of Virginia Tech’s Equity and Disparity for the Human Condition strategic growth area, said Georgeta Pourchot, coordinator of the International Refugee Research Project and editor of the brief.

political science, urban affairs, history, and the Biocomplexity Institute — collaborated with national and international partners. These include United Nations High Commissioner for Refugees Kelly Clements (an alumnus from the School of Public and International Affairs); the University of Bundeswehr, Munich; University of Kent, Brussels; the Akademie fur Politische Bildung, Tutsing, Germany; Catholic Charities; and other stakeholders from both the private and public sectors.

The research included social media analysis of the influence of political actors on public attitudes about refugees in Roanoke, Virginia; an analysis of resettlement supports in Japan; lessons learned from the 1970s camps in Kenya; an analysis of levels of integration in new European Union countries; and interviews with Iraqi, Syrian, and Afghan refugees arriving in Germany and the United States.

Select findings show that refugees are forced to leave their countries due to violent conditions of war and civil conflict; their journey to a presumed place of safety is marred by violence and uncertainty from traffickers and geographic conditions (seas and mountains to cross); and their arrival does not always mean being safe. Refugees arrive scarred emotionally and physically by the violence they escape, and the process of resettlement into a new country is far from smooth, from language challenges to culture shock.

“These findings reinforce that in the short term, refugees need intensive attention and resources, like education and job availability, to help them through the resettlement process,” said Pourchot. “But in the long term, they become contributing members in the societies into which they integrate.”

The research project was recently featured at the launch of the University Alliance for Refugees and At-Risk Migrants at Rutgers University.

“There are no simple answers to the global refugee crisis. Meeting the challenges and demands of the crisis, at the local, national, and international level, requires a multilevel and interdisciplinary approach that Virginia Tech and the School of Public and International Affairs is ideally suited to lead,” said Joel Peters, the school’s director.

The brief aims at policy impact and will be offered to public and private agencies working with refugees. Subsequent briefings will be organized with policymakers to raise the level of visibility and understanding of this research.