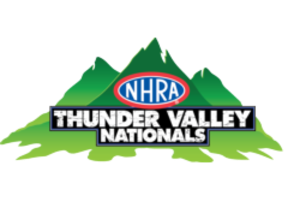 Mike Salinas picked up his second win of 2019 in the NHRA Thunder Valley Spring Nationals at Bristol Dragway, and as demonstrated by the tears in his eyes and the tremble in his voice, it was a win not only for him but his father too.

Even bigger for Salinas; it was on Father’s Day and coming at a difficult time in the driver’s life.

Currently, the senior Mike Salinas, a former dragster driver himself, is in declining health and often does not know his family, let alone his son. But when the elder Salinas is watching television coverage of the younger Salinas, he often perks up and tells his caretakers, often the driver’s sisters, that it’s him racing again.

Salinas claimed his second Top Fuel victory of the season in his Scrappers Racing dragster and the win put Salinas in championship contention  in the NHRA Mello Yello Drag Racing Series.

“This weekend we just focused on having fun,” Salinas said. “Alan [Johnson, crew chief] knows what he’s doing. It’s amazing to be in the seat with these guys.”

Salinas said that defeating Brown, Kalitta and Torrence in consecutive order wasn’t easy. Instead, it was a full day’s work.

Salinas ended Torrence’s five-race winning streak and covered the distance in 3.836 seconds at 325.69 mph to edge Torrence’s dragster at the finish line, which trailed with a 3.892 at 287.60 mph in his white Capco Contractors dragster.

The San Jose, CA native had “never won against Antron or Steve,” according to Salinas. “Doug Kalitta is a great opponent and his lights are amazing. Those three guys are going to run for the championship. I am learning how to get to that level and I will get there. You have to have some luck in this deal. I think today we had a little luck and we ran decent and you have Alan Johnson and his experience and that’s how we did it.”

With the win at Thunder Valley, Salinas moved to third in the points. Salinas was also quick to give credit to his crew chief Alan Johnson calling the shots.  Salinas added that he “feels like he is one to watch the rest of the season” but the driver is restricted when it comes to full blown celebration on the current season.

“We are going to do one race at a time,” Salinas said. “Sometimes when you talk you get yourself in trouble. We let our talking happen on the track. [Steve] is the champ. You have to step back and look at how long it took him to get to where they are. They worked their butts off. Steve Torrence is why I came back to racing. I owe that family a lot. We are going to do this a lot more. None of us show up to lose. We are going to show our stuff on the track and this has the potential to be a great rivalry.”

In the Funny Car final, Bob Tasca III avenged a loss at Thunder Valley last year to eventual champ Ron Capps and advanced to the final this year where he would shut the door on NHRA star John Force’s 150th career victory. The Rhode Island driver took his fifth win of the season and first since 2012 by outrunning Jim Campbell, Robert Hight and Capps in that order. But in the final, it was all Tasca.

The third generation driver defeated Force by driving his Ford Shelby Mustang to a final round performance of 4.008 seconds at 316.23 mph, while top qualifier Force tagged behind with a 4.155 at 287.05 mph.

Before the final, Force experienced an issue with his Peak Blue-Def Chevrolet Camaro.  The car would not back up and Force’s crew went underneath the hood and checked out the issue and pushed the car back to the starting line to face off against Tasca.

“I knew it would be a slugfest against Force,” Tasca replied.  “I didn’t know what was going on up there. I thought maybe he was trying to run me out of nitro out there. I guess he had some problems putting it in forward and reverse. I love racing John. I said getting out of the car it’s one of the biggest career wins for me.”

While Force may have told the crowd over the weekend that he was going to take it one race at a time himself, the legend was strongly looking for his milestone victory, and hoping that a gesture by daughter Brittany of displaying the original John Force “Brute Force” logo on her helmet and a great weekend by Brittany would up the ante and serve as the ultimate weekend of his career.  But it wasn’t meant to be.

Force said he was disappointed he didn’t finish off the day with his fifth Bristol win, but is encouraged by his team and the gains this weekend.

“No Father’s Day for me, didn’t get that win,” Force said. “I feel a lot better about my race car being competitive. We’ve moved up to No. 2 in the points, that’s some good news. I’ve got confidence, not just in my car, my car has always been good, (crew chiefs) Brian Corradi and Danny Hood and (car chief) Tim Fabrisi, but I have confidence in me. We had an issue up there and that happens, but I’ve had to make a lot of changes myself. I’ve found out a lot of stuff. Not just with the car. I’ve been going to doctors, got special glasses, working on eating habits, got to get off that sugar, it drops ya. I’ve said it before, I’m in the game. That win is coming.”

Tasca, who ran a limited schedule from 2015-2017, posted a semifinal finish at Phoenix,  felt like his team really turned a corner in recent races and even more at Bristol.

“Last year was a tough year,” Tasca said. “We started from scratch. We didn’t have the consistency. Then we started to catch our stride coming out of Richmond. To be able to deliver this win, and it’s only one, but trust me, it’s a big win for this team. You have to take notice of how the car is running.”

Tasca said after the race that the addition of former John Force Racing crew chief Jon Schaffer to his team has really made a difference.

“The only thing that’s the same in this race car is me,” Tasca said. “We flushed everything. Eric [Lane, crew chief] checked his ego at the door and he has worked well with Schaffer. Trust me, this isn’t going to be the last time you hear from this Ford.”

With all of the history, tradition and prestige that is Bristol Dragway, the win today was really satisfying.

“I remember walking into this place for the first time and saw a photo of my grandfather hanging in the tower and it’s such a beautiful facility,” Tasca said. “I’ve always wanted to win one here and I’m glad to get it done today.

“It’s a lot of fun. To see my guys work as hard as they’ve been working to put us in position and then close the deal. It’s really hard to win out here.”

Other winners included Jose Gonzalez in Pro Mod, who defeated Bob Rahaim in the final round; Tii Tharpe scored his second straight win of the season and at Bristol in Top Fuel Harley by outrunning Bob Malloy; and Todd Hoerner took the victory in Mountain Motor Pro Stock exhibition by holding off Frank Gugliotta.