Sheriff: People ‘will shoot law enforcement before they give their guns up’ 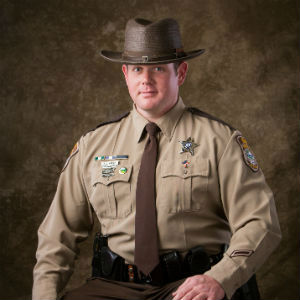 Augusta County Sheriff Donald Smith told the Board of Supervisors on Monday that he will not enforce any gun-control laws passed next year by the Virginia General Assembly.

What he told me today in an interview makes that seem pale by comparison.

“I can stand firm while it’s in court, but once the United States Supreme Court says, hey, this is constitutional, I honestly feel like the people of Augusta County will shoot law enforcement before they give their guns up,” said Smith, who was re-elected by county voters earlier this month.

Now that I have your attention …

Actually, before we get too far into the weeds on this, need to say here that Donald Smith earned our endorsement in both of his election campaigns, and our view here is that he has done a solid job as county sheriff.

He was gracious with his time going into detail on his thoughts on this issue in the context of a county-wide debate on a push from a vocal group of partisans to declare Augusta County a “Second Amendment sanctuary.”

It’s politics, and Smith has found himself in the middle of it.

That context having been established, you probably know already that there isn’t anything in the form of proposed legislation that would force anyone in Augusta County or elsewhere in the Commonwealth of Virginia to “give their guns up.”

But you also know that the debate ongoing in the county as to whether or not to declare a “Second Amendment sanctuary” isn’t as much about what is actually being proposed in Richmond as it is about the next election.

I say that because the actual details of the bill in the crosshairs of the gun lobby as it presses its case for sanctuaries, Senate Bill 16, prefiled by incoming Senate Majority Leader Dick Saslaw, D-Fairfax, are … not all that exciting.

SB 16 focuses on assault weapons, most notably requiring dealers to request background checks from sellers before completing a sale of an assault weapon, and also making it a Class 6 felony to import, sell, transfer, manufacture, purchase, possess or transport an assault firearm.

Additional language in SB 16 would prohibit a dealer from “selling, renting, trading, or transferring from his inventory an assault firearm to any person,” and prohibit any person “from carrying a shotgun with a magazine that will hold more than seven rounds of the longest ammunition for which it is chambered in a public place.”

Another provision makes it a Class 1 misdemeanor to “import, sell, barter, or transfer any firearm magazine designed to hold more than 10 rounds of ammunition.”

Smith, in our conversation on this, criticized language in bill as written as being “very vague, very wide,” and was especially critical of the requirement for background checks, going into detail about how it would prevent private sales, though the bill as written requires background checks only in sales involving licensed dealers, and how it would also lead to a system for requiring registration of guns, which, no, not in the bill.

He also argued that the bill, if it were to become law, would require law-enforcement agencies in Virginia to “go out and start confiscating weapons,” though it’s not clear how he has come to this understanding.

The imagery with the use of that word, “confiscation,” conjures up the idea that law enforcement would be required to go door to door looking for guns and taking what they find.

Nothing of the sort is spelled out in SB 16, but Smith still contends otherwise.

“When it says ‘possesses,’ and it says it is a Class 6 felony, there is no way around confiscation,” Smith said.

It’s honestly depressing to hear him make that case, to be honest, because as a practical matter, the law would only come into play from a law-enforcement standpoint in the course of investigations of other crimes.

As with anything else, law enforcement would need to develop information about potential violations of an SB 16 statute to be able to obtain a search warrant and build a case toward possible prosecution.

“Confiscation” is something you see in movies about some far-off dystopian future.

Which, if you believe the sheriff, may not be as far off as the movies make it to be.

Let’s conclude with the full context of the quote at the top of this article.

As we talked through the issue, I asked Smith directly what happens if SB 16 becomes law, is challenged and then ultimately upheld as being constitutional.

“I think it needs to be understood, I don’t get to decide what’s constitutional and what’s not. The judge decides that,” Smith said. “I’m not that authority that I get to say what’s the law. The Constitution is very clear that they have the right to bear arms. I can stand firm while it’s in court, but once the United States Supreme Court says, hey, this is constitutional, I honestly feel like the people of Augusta County will shoot law enforcement before they give their guns up.”

Nobody will get shot if SB 16 passes and is ultimately upheld as constitutional.

Because, breaking news, nothing in SB16 is going to make the people of Augusta County give their guns up.