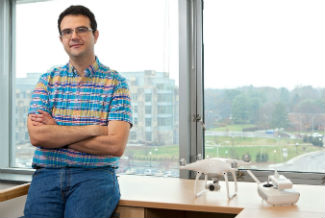 As wireless networks continue to grow and progress, 5G networks are gaining prominence with systems being integrated into everyday life. Similar to virtually any technology, systems evolve into a new generation as limitations are defined. For wireless cellular systems, that period lasts for about a decade and researchers ask, “what’s next?”

“The development of a wireless cellular system generation requires a decade of research and early-on visions are important to drive that research,” said Saad. “This is what my group has been doing across various projects, each of which constitutes one component of 6G.”

The vision for a new generation often stems from emerging technologies that are not yet anticipated or finalized at the time of the previous generation. There are 5G drawbacks that have spurred worldwide activities focused on defining the next generation 6G wireless system that may work to integrate far reaching applications ranging from autonomous systems to extended reality and haptics, otherwise known as any form of interaction involving touch.

What does that mean for the average cellular consumer?

“We envision that some of the main unique features of 6G, compared to the upcoming 5G will include the following: higher data rates, fast and reliable communication, connectivity in 3D, an artificially intelligent system, 6G as a multi-purpose system, end of the smartphone era, communication with ‘surfaces’ and providing connectivity to multi-sensory applications,” Saad explained, also a member of Wireless@Virginia Tech.

Higher data rates will provide an exponential increase compared to 5G, yielding a target of about one terabit per second. This will support new wireless applications such as virtual and augmented reality, which will require researchers to explore more spectrum at higher frequency bands.

Prospective 6G applications such as connected autonomous systems, including vehicles, drones, and robotics; extended reality, and haptic communication are not only “data-hungry,” but also require a fast and highly-reliable connectivity. Therefore, 6G should provide high rates, low latency, and high reliability.

Today’s wireless systems, including 5G, were designed to primarily service ground users. Thus, the expected wide-scale deployment of drones will require that 6G support both ground and aerial users. However, 6G must re-think its current architecture and technologies to be able to support flying users in three-dimensional space.

In addition, 6G could use drones to provide temporary connectivity in hotspots areas such as a stadium or rural areas where infrastructure is scarce. Saad envisions 6G as one of the first cellular system generations that will seek to integrate ground, aerial, and satellite networks.

Saad is collaborating with international resarchers Mehdi Bennis and Mingzhe Chen who hypothesize that 6G will have to be an autonomous system that can self-configure and self-sustain. To do so, it will have to integrate notions of artificial intelligence across its protocol stack and devices. 6G could potentially leverage artificial intelligence to replace traditional, rigid frame-structures that are used to manage the system with intelligent and adaptive protocols.

The past five generations of cellular systems had one exclusive function: wireless communications. The team expects 6G to disrupt this premise by providing multiple services that include communications, computing, control, localization, sensing, and even energy.

The 6G network must be able to support a new breed of wireless devices such as wearable devices, virtual reality apparatus, and even implants whose rapid proliferation may gradually replace the smartphone. The technology may gradually start to rely on electromagnetically active surfaces such as walls with massive antenna arrays, instead of classical base stations to provide seamless connectivity and very high-data rates.

“6G must also provide a user experience that is directly tailored to the multi-sensory perceptions and cognitions of the human users, as driven by human-centric applications like virtual reality and wireless brain-computer interfaces,” Saad explained.

Saad concludes that although each cellular network generation takes approximately a decade to come to fruition, 6G efforts are at an early planning stage and over the next few years the public could reasonably expect 2030 to be an achievable target.

In the meantime, within five years, we can potentially see an enhanced 5G system that can be a first step toward a fully-fledged 6G.