we were blessed to know tess
Local

We were blessed to know Tess 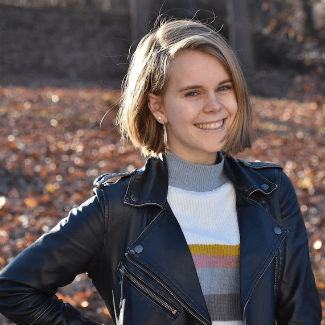 Tess Majors would conquer the world. I became convinced of that this past spring.

I wasn’t sure how. Neither, it seemed to me, was she.

Maybe it would be music. Maybe she’d write the great American novel. Slim chance it was going to be journalism, which is how I got to know Tess, through her internship with Augusta Free Press.

I say slim chance with journalism, because Tess wasn’t too sure about the journalism thing when she began the internship in April.

And that’s putting it mildly.

“I’ve always loved writing. I’ve been writing in various forms since I was a little kid. I’d write in a journal, write about myself, write poems. More recently, I’d started to write songs. But journalism was a field that I’d never really delved into before,” Tess told me in an interview that we recorded for a podcast at the end of her internship in May.

I got the sense that it had maybe been her father, Inman, who’d nudged her into approaching AFP about the internship.

I first met Inman more than a decade ago when he was writing a feature piece for the New York Times on how the 2008 presidential election was playing out in rural Virginia.

The Majors family ended up settling in Waynesboro for a few years before relocating to the Charlottesville area. Inman and I kept up with each other over the years, and he reached out to me late last year to pitch an internship for his daughter for the spring.

Tess and I met for coffee over her winter break last December.

We’ve had the fortune to have had a number of interns over the past decade-plus. One has gone on to a job at ESPN, another at USA Today, a third is the weekend news anchor for one of the local TV stations here in the Valley, another just graduated law school.

The first meeting with each followed the same formula: quick meeting, I’d sign a piece of paper that would go back to the appropriate person at the school, and we were done, maybe 15 minutes, maybe 20.

It was a Friday afternoon. We met at 3, and I had to call my wife at 5:30 to tell her that I hadn’t gotten lost somewhere.

The intervening two and a half hours felt like an interview – Tess interviewing me, asking me why I’d wanted to get into journalism, how I did what I did, and various and sundry related topics.

I left her that day telling her that she may not be interested in journalism as a career, but, oh, yeah, she’d be really good at it if she ever did.

Fast forward a few months, to April, and the beginning of her actual work with us at AFP.

Having had kids work with us for many years now, I’d developed an approach to ease a new intern in; basically, assign an easy story, a one-person feature interview, usually, just to let the newbies get their feet wet.

Tess didn’t want the easy way. She’d read up on how the local school budget was sparking some controversy in Waynesboro, and she’d noticed that the city council was set to have a public hearing on the budget, and she wanted to dive into that as her first story.

Now, as an editor, it can be hard to get your paid staff interested in covering city council budget hearings.

We’re not talking anything easy, and certainly not the most interesting.

Tess, though, was insistent, even as I warned her about what she was getting herself into.

I sent her links to stories that I’d written about the ongoing mess, stories from budget battles in past cycles, and off she went.

Her story on the budget hearing, needless to say, blew me away, and I joked with her afterward that were she to decide to forego college, she could just go ahead and go pro as a journalist now, if she wanted.

From there, she wrote a feature on a high-school student in Albemarle County working to design a mobile app to provide information on public accommodations for people with physical challenges.

A story she reported on the Augusta County music scene stands out.

The topic allowed her to draw upon her experience as a young musician – I’m not overselling it to suggest that she had tons of talent, as a vocalist, on bass and as a song writer, a triple threat – and also to grow a bit as a journalist and otherwise.

“The one thing I’ve learned from this internship is you can’t really get too set on an idea,” she told me on the interview for our podcast. “It’s all about being able to think on your feet. Things change up. People don’t call back. For this article, a lot of people didn’t call back.”

Her goal at the outset, in her words, was to “write about all the nice aspects of the music scene in Augusta County.”

“And then I figured out that there was a big issue with lack of places to play, particularly for young people. So, I ended up focusing on that a bit more.”

A writer who has been through a college journalism program doesn’t necessarily get that in college or even early into their first paid journalism job.

Tess, keep in mind, is 17 here, still looking forward to her high-school graduation.

As her internship wound down, she told me that she had learned a lot about journalism, but she still wasn’t sure journalism was going to be in her future.

I knew from working with her that music was her passion, and it made me smile when she told me this story on our podcast about how the internship had helped her as a musician.

“This is where being in this internship has helped me out a lot, because a lot of what I’ve had to do is reaching out to random people and just basically asking them to talk to me, which is a little nerve-wracking. But once you get used to that, it makes life a lot easier,” she said, as a preface to the story about how she’d booked a gig for her band, Patient 0, at The Southern Café & Music Hall in Charlottesville.

Tess had noticed that The Southern was advertising an upcoming show featuring a band that she liked, and the advertisement didn’t list an opening act.

“Just totally out of the blue, I emailed the agent, and I was like, hey, can I open for this band, and he was like, well, no, we have an opener for this date. But you can open for this other band that’s coming later this month,” she said. “So, I actually ended up being able to play a show there, and I think it’s just so important to be able to take those chances. What’s the worst thing they can do? Not respond or say no, basically. No one is going to judge you for reaching out, so you might as well do it.”

She ended up landing another gig in New York City, where she was attending Barnard College, in October.

This makes her one of two of our former interns to reach out after their time with us, incidentally.

Kids get caught up with school.

There’s that, maybe a little, phew, glad that internship with that overbearing guy is over.

“This is Tess, your former intern,” she began, unassumingly, before asking how things were going at AFP.

Then: “I am really enjoying my first semester at Barnard, and my band put out our first album not too long ago.”

She sent a link to her music on Spotify.

“Anyway, I hope all is well in your world, and I just thought I would check in. I hope to take some classes on journalism at Columbia sometime soon, but I think they have a pretty competitive program. However, I am writing a piece soon for one of the school’s music blogs. I cannot thank you enough for the skills the internship taught me in terms of how to reach out to and interview people.”

To say that she made my day that day is an understatement.

I wrote her back to let her know that if an email from her former editor would help with her interest in the journalism program at Columbia, I was ready to sing her praises.

It is beyond my ability to process what has happened since that none of the great things that Tess Majors was destined to do will be able to come to pass.

I’m certain, as certain as I am of anything, that she was going to achieve in whatever it was that she decided to set her sights upon.

I’ve tried to do the best I can to sing her praises today. Media outlets from everywhere have reached out to us because of that podcast that she did with us, and I’ve taken every opportunity to tell her story.

She was – and I hate that tense, the past tense – a musician, a storyteller, a budding journalist, a daughter, a granddaughter, a sister, a friend.

I’m struggling with … how to conclude this.

I feel blessed that we were able to get to know Tess and be a small part of her life.

Her answer to what had stoked her interest in journalism stands out.

“I thought it would be a really interesting experience, because reading a news article, it’s totally up to how the reporter spins it a certain way, and the way that you end up coming away from a situation is totally influenced by the person writing it. So, I thought was really cool, that you can take an experience and show it through a particular lens, and someone can have the same experience, and have it be completely different. I thought the subjectivity of the field was fascinating.”

I listened and re-listened to that part of the podcast several times.

No spin, no special lens here when I say this: the world is a darker place today.

Please keep her family in your prayers. They’re going to need them.

And maybe in memory of Tess, do something totally out of the blue, your version of emailing a music hall and getting yourself booked to play a concert.

What’s the worst thing they can do? Not respond? Say no?

Also, hug your kids. You never know when you might not be able to again.