By Annie Raab and Sarah Boudreau 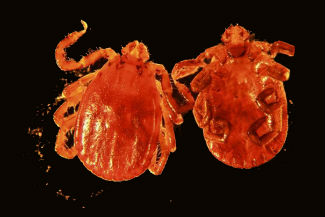 When seven cattle mysteriously died on a farm in Albemarle County in 2017, veterinary anatomic pathologist Kevin Lahmers had no reason to suspect the culprit: a tiny pest carrying a disease commonly confined to the Eastern Hemisphere.

WATCH HokieTalks video on how his team identified this new tick-borne threat: video.vt.edu/media/1_6v604ckr

“I was investigating cows that had died from Theileria,” said Lahmers, clinical associate professor of anatomic pathology in the Department of Biomedical Sciences and Pathobiology (DBSP) at the Virginia-Maryland College of Veterinary Medicine. “I was asked if I wanted to look at the ticks found on the property, so I agreed.”

In short order, Bruce Bowman, a field veterinarian for the Virginia Department of Agriculture and Consumer Services’ (VDACS) Veterinary Services, delivered the ticks to Lahmers.

An expert in the epidemiology of tick-borne diseases in domestic animals, Lahmers serves as the associate director and the head of research and development for the veterinary college’s on-site diagnostic lab, the Virginia Tech Animal Laboratory Services, or ViTALS. He works in conjunction with the lab’s clinical microbiologist to identify threats, develop appropriate diagnostic tests, and rapidly respond to emerging diseases.

Upon receiving the ticks from Bowman, Lahmers knew immediately that something was amiss. “I saw they weren’t what they should be,” he said. “They weren’t typical, and that’s when we alerted the federal authorities.”

Lahmers brandished a glass vial with tick samples floating in alcohol. “Here, we’ve got the big engorged ticks, we’ve got the medium-sized ticks that are not engorged, and we’ve got the smaller ticks,” he explained. Nymphs, adults, and well-fed specimens swished together in the fluid. They are a striking burgundy color, and the blood-engorged samples have collapsed a bit, resembling partially dried cranberries.

Testing in ViTALS determined that the ticks were a species called the Asian longhorned tick, first reported in the Western Hemisphere in 2017, and now present in 30 counties in Virginia and 12 states nationwide.

The presence of the pest in Virginia and the disease it transmits — Theileria orientalis — are still unexplained. In addition, although T. orientalis has been identified in other regions of the U.S, the Ikeda subtype found in 21 Virginia counties is a new discovery. At present, ViTALS is the only laboratory in the U.S. capable of testing for the Ikeda genotype, which causes anemia in cattle.

ViTALS’ director, Tanya LeRoith, clinical professor of anatomic pathology in DBSP, was particularly eager to work with the ticks. “Having done my Ph.D. on a related parasite in cattle, I welcomed the opportunity to study hemoparasites,” she said. “Other strains of T. orientalis, one of which we have found in Virginia, are considered nonpathogenic.”

In order to limit the spread of the parasite, LeRoith said, it is important to distinguish between the Ikeda strain and other strains. The clinical signs can mimic those of Anaplasma marginale, but do not respond to antibiotic treatment.

To that end, ViTALS runs a PCR (polymerase chain reaction) test that can identify both T. orientalis and A. marginale concurrently, decreasing cost and turnaround time.

Lahmers noted that the Ikeda strain was identified in the course of looking for a disease that could potentially spread to other animals — and humans.

“We had the knowledge that this tick existed in New Jersey, and T. orientalis Ikeda genotype was considered a foreign disease,” he said. “If we hadn’t gotten this information from a human medicine angle, the connection between the tick and this disease might not have happened. The fact that this tick has the potential to carry human diseases, as well as animal diseases, is significant.”

Even though no cases of human disease from the ticks have been reported in the U.S., Lahmers said, “lots of people are looking.” He points to the unusual case in the New Jersey suburbs, where an Asian longhorned tick was found on a man who had picked it up on his mowed, suburban lawn — an unexpected development, for the longhorned tick is typically associated with leaf litter and tall grasslands.

Other potential complications have also surfaced. “This tick can feed on multiple species,” said Lahmers. “The second issue is it reproduces asexually. So one tick, translocated somewhere else, can reproduce.”

The lab’s findings regarding the T. orientalis Ikeda genotype and how it may be transmitted in cattle by the Asian longhorned tick were published in the September 2019 edition of Emerging Infectious Diseases.

In a November 2019 story in Bovine Veterinarian about the threat posed by the tick and the disease, Lahmers underscores the impact of T. orientalis and discusses how the disease can result in lower profits for farmers and a compromised quality of life for cattle.

In the absence of any immediate threat to humans, Oakes likewise considers the disease process from a farm-to-table perspective because, obviously, healthy production animals yield a more secure food supply.

In plain terms, production animals that are chronically sick fail to produce enough for farmers to earn a living. “For example, a beef cow that’s infected with T. orientalis Ikeda will spend energy fighting off disease instead of laying down muscle,” Oakes explained. “The more time she spends sick, the less time she spends making muscle, which translates to less money for the producer and less food for the general population.”

More expansively, Oakes makes the case for human commitment to animal health, reflecting the veterinary college’s One Health orientation. She believes that veterinary researchers must do more than just prevent disease from spreading to humans; they must also work to ensure that domesticated animals live well.

“The moment in our evolutionary history that we started taking wild animals and domesticating them to serve our purposes, we became the stewards of their health,” Oakes said. “We really owe it to the creatures that give their lives for us to ensure those lives are as free from discomfort as possible.”

As the son of a dairy veterinarian who was raised on a cattle and swine farm, Lahmers is similarly inclined. “I got into this field to answer questions,” he said. “I’ve been given an opportunity to do something that helps the agricultural community, and I want to do it well. Having to contend with a new disease is not ideal, but I want to be part of the solution.”

That expertise will most certainly be needed. In late January, the West Virginia Department of Agriculture confirmed the presence of Theileria orientalis Ikeda genotype in three West Virginia counties through work with ViTALS to determine the extent of the disease across the region and its impact on the livestock industry. At this time, additional surveillance samples are being collected throughout the state.