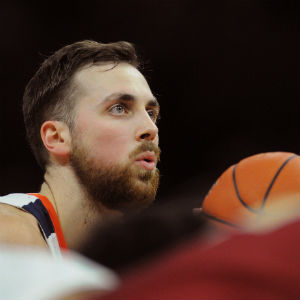 Jay Huff said what the rest of us have been thinking about what the 2020 NCAA Tournament could have been for defending champ Virginia: “I think everyone could tell that we were kind of hitting our stride.”

The champs, Huff said, had put themselves in a position where they could “do some damage in the tournament.”

“Obviously, who knows, because it’s the NCAA tournament, anything can happen, but it would have been really cool to at least try for another tournament, win another championship,” Huff said.

That 8-0 streak to finish out.

Eleven wins in their last 12.

It took some time to process how it all ended – not with a basketball game, but at a shootaround, when word got to the team that the ACC Tournament had been cancelled, and then the final word on the trip back to Charlottesville that there would be no NCAA Tournament.

“I figured, you know, I think the ACC tournament, I figured we were going to play it. And then once NBA season kind of stopped, me and Mamadi (Diakite) were watching in our room, and once that started getting postponed, and they started sending people home from that, I was like, there’s no way we’re going to play our games, because I could see that things were kind of moving quickly, so I didn’t expect to play. You know, we went to shootaround thinking, you know, we weren’t gonna have fans, but I just wasn’t sure how long that was going to be the case and how quickly that might change,” Huff said.

Then everything else got shut down. For Huff, a redshirt junior in terms of basketball eligibility, but a fourth-year student on course to graduate next month, it meant finishing up his classes online, and not being able to properly say goodbye to college friends.

“It’s not just the end of the season, you know, it’s the end of so many people’s, you know, kind of lives, as they know for the foreseeable future. So, it was it was a lot that just kind of took some time to process, like, just with things going on now, you know, with school with, you know, friends and family, what they were going to do, that whole thing. So, it was really, it took a little bit of time on the drive back to process at first.

“I was just like, well, it’s cancelled, and then eventually, it kind of set in, like, man, like that’s kind of it for the season. So, it was very strange for sure.”

In the here and now, Huff is working on his daily routine – classes, conditioning, including adding yoga to his routine.

“If you think I look funny doing yoga, imagine Jack Salt,” said Huff, planting another image in your head that you won’t be able to erase anytime soon.

“I’m not flexible at all, but just trying to, you know, stay limber and work on the core a little bit, just doing a little bit extra, you know, with all the free time I have, kind of, same as everybody else just trying to find stuff to do. But it’s been good. I’ve enjoyed it.”

Keep this in mind next year when you see Huff racing back a split-second quicker after a hard hedge on a screen and roll, or stretching a little higher to block a shot at the rim.

It was the offseason yoga.

Seriously, Huff made a huge leap on the defensive end this past season. You would have not believed, a year ago, that you’d look at the sports-reference.com list of national leaders in defensive rating and see the name Jay Huff at #1, but there it is.

Huff has always been an elite rim protector, but where he’d get himself in trouble was on his other key responsibility as a big in Tony Bennett’s Pack-Line – the hard hedge, which requires the big to be able to help the guard trap the ball-handler to eliminate the dribble-drive, then after stopping the dribble penetration, racing back to the paint to pick up his man.

“Yeah, I definitely think I got way more confident,” Huff said. “Just, you know, a lot of that, you know, Coach Bennett’s system is obviously really good, but I also think that I was just getting to the point where I didn’t think about it as much, you know. I would get the points in games where I was on the floor for long periods of time, and I would kind of go into autopilot, and I wouldn’t have to think, and I was able to just figure that out, which I think was really good.

“Personally speaking, I like to think that the, you know, the defense spoke for itself, and that the way I was able to help the team was impactful,” Huff said. “You know, a lot of that is just the way our team plays defense as well, like Mamadi, and Braxton (Key), Kihei (Clark). Those are three guys that, you know, I think we can we could stop any team in the country. So I think that, you know, being there to know whether play help defense, or to blow up a ball screen, I think that we figured out how each other works and how we play well together, and just got more comfortable throughout the year, so I think that was a big part of it.”

Huff spent almost the entirety of a roughly 20-minute Zoom conference call with beat writers Thursday talking about next season being something involving him being at Virginia, but he did concede, in response to a question about the possibility of putting his name into the NBA Draft pool, that he is considering testing the waters.

Huff is, very clearly, the kind of player that NBA front offices covet. You can’t teach 7’1”, for one thing, and then there’s his ability to protect the rim, and that he can hit the three, and work off the three with his athleticism to get himself to the rim off pump-fakes.

There are things he knows he needs to work on.

“I mean, I’d like to realistically improve a lot of it, you know, my free throw percentage, I think could definitely go up,” said Huff, who somehow shot just 54.0 percent from the line this past season, which is odd considering his other shooting numbers – a career 38.5 percent from three-point range, and 59.0 percent from the field.

“I consider myself a good shooter, so that was just never something that made sense to me, you know. I should obviously shoot better than I do from the free throw line. So, I’ve been working on that a lot. And I think I’ve fixed a good portion of that,” Huff said.

Huff also needs to do more in the post: “You know, just developing a couple more moves, and just, you know, using that more.”

One thing about basketball, unlike other sports, is that you can work on so many thinks on your own.

“Kind of just working on everything, with, again, with all this time that I have,” Huff said. “It’s actually really nice it’s a good time to be able to work on my game whether or not, you know, you can get into a gym or not. Always got the hoop in the driveway, at the very least have a ball.”

Assuming he returns, Huff will play a second season as a defending national champ.

“Oh, yeah, people joke a little bit (about that),” Huff said. “I mean, that was kind of, I think, the whole team’s first thought, like, when that we were at shootaround when we got the news that the ACC tournament was canceled, and then everything spiraled after that. But our initial thought was, well, you know, if the season’s over, we’re still technically champs. So, that was, I don’t mind it. I think it’s a good thing. Some people have joked about it, not in a negative way. So, I don’t mind it at all.”