DOI to treat 11,000 acres in Virginia this wildfire season 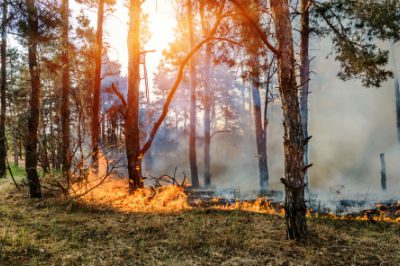 The Department of the Interior has been working to implement preventative measures to limit the size and scope of wildfires, treat current wildfires already underway, and protect wildfire-prone areas to best safeguard people and their communities.

“As stewards of one-fifth of the country’s public lands, primarily in the West, we know that our ability to be prepared for wildfires and reduce their severity is paramount to protecting communities and saving lives,” said U.S Secretary of the Interior David Bernhardt. “In collaboration with local, state, and other federal partners, we are using everything in our arsenal to prepare for wildfires this year, treating more than one million acres.”

As a part of the DOI, the Bureau of Land Management (BLM), the Bureau of Indian Affairs (BIA), the National Park Service (NPS), and the U.S. Fish and Wildlife Service (FWS) contribute to a total workforce of 4,500 firefighting personnel, 500 tribal firefighters, 151 smokejumpers, 18 interagency hotshot crews and 4 Tribal hotshot crews. These firefighters will have over 600 pieces of specialized equipment available for use, including engines, water tenders, dozers, and other equipment. Aviation assets also play a critical role in efforts to manage wildfires as the DOI will have access to 23 single engine air tankers, 6 water scoopers, 41 Type 1, 2 and 3 helicopters, and a number of other aviation resources.

The Trump Administration has prioritized active management of the nation’s public lands as provided in the President’s Executive Order 13855 and Secretary’s Order 3372, which establish a meaningful and coordinated framework for ensuring the protection of people, communities, and natural resources. Implementation of both Orders is a priority for reducing the risks of deadly and destructive wildfires.

This year, the BLM began analyzing a significant, 11,000-mile stretch of strategic fuel breaks to combat wildfires in the Great Basin, which includes portions of Idaho, Oregon, Washington, California, Nevada, and Utah. This large-scale, collaborative project could serve as a means to better control wildfires within a 223 million acre area. The environmental impact of the proposal is still being evaluated.

As DOI continues to evaluate innovative ways to best limit the destruction of wildfires in the future, it is nearing completion of more than 2,500 wildfire risk-reduction projects on more than 1.2 million acres of DOI and tribally-administered lands in some of the most fire-prone areas of the country.

In Virginia, more than 11,000 acres of land will be treated. Thus far this year, the NPS has completed a prescribed burn in Manassas National Battlefield Park. The prescribed burn helps to reduce the risk of wildfires and improves the habitat for wildlife.

As wildfire activity likely increases, DOI, in collaboration with local, state, and federal partners, is moving wildfire suppression resources to the most susceptible areas around the country. At the center of this coordination is the National Interagency Fire Center (NIFC), which coordinates eight different agencies and organizations’ emergency management responses. The NIFC produces a monthly “National Significant Wildland Fire Potential Outlook,” which provides wildland fire potential forecasts for the country. The most recent outlook forecasts potential for above normal fire activity in western Oregon and Washington, parts of California and Nevada, and the interior of Alaska.

“Most of the western states experienced a wet spring, which allowed vegetation to grow thickly and quickly,” said Fire Weather Program Manager with NIFC’s Predictive Services group Bryan Henry. “The wet, cool spring delayed fire season, though now, we are seeing hot and dry weather throughout most of the western states, which is rapidly drying the abundant vegetation and creating fuel for wildfires.”

Due to a cool, wet spring season, wildfire activity has been below normal this year with 27,191 wildfires burning 3,325,456 acres. This is much lower than previous years as around 39,700 wildfires burned over 4.1 million acres at this point in the season last year and 5.8 million acres in 2017.

Last year was one of the most tragic years on record with more than 58,000 wildfires burning over 8.8 million acres. Additionally, nearly 26,000 structures were destroyed, more than double the previous annual record.

DOI is currently managing wildfire incidents in Alaska, Arizona, Montana, Nevada, Utah, and Washington, and has deployed personnel, aircraft, and equipment throughout the country to work with interagency firefighting partners.